High Fortress Above the Sea

High Fortress above the sea - the world drives
Its carriages across it;
And you, all you ships of the sea,
Pass beneath its chains.
David Owen (1784-1841)
Translated from the Welsh englyn poetic form. 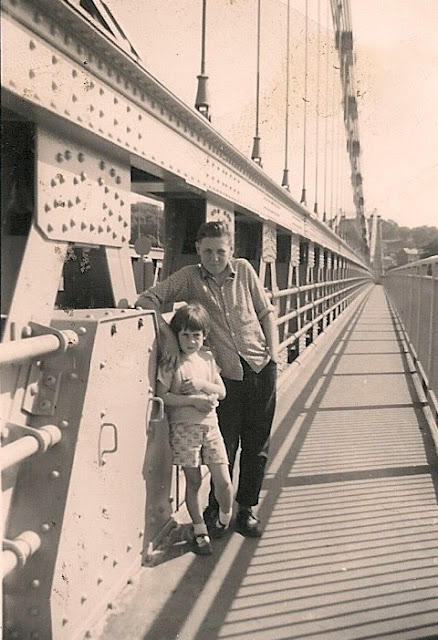 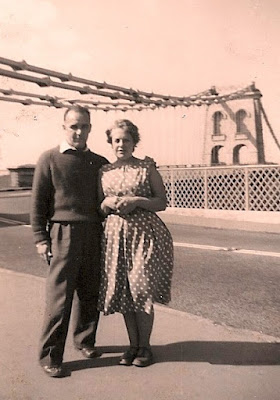 The year was 1959 and we were on holiday in Llandudno, Wales, during the last week in August. My brother and I are posing on the Menai Suspension Bridge. Designed by Thomas Telford to carry traffic between the mainland of Wales and Anglesey, it was completed in 1826. Before its completion the only way to cross the dangerous waters of the Menai Strait was by ferry.

“I heard him then for I had just
completed my design,
To keep the Menai bridge from rust
By boiling it in wine.”
Through the Looking Glass, Lewis Carroll

The towers on either side of the Strait are constructed from Penmon limestone. The sixteen huge chain cables, each made of 935 iron bars, support the 176 metre span, and between manufacture and use were soaked in warm linseed oil (not boiled in wine as the White Knight in Lewis Carroll’s poem, above, suggests).

And here are our parents snapped at what was then a T-junction. The breeze has caught the skirt of Mum’s dress, making her appear much larger than she was, so it’s possibly not one of her favourite photographs.

Incredibly, Mum and Dad are standing just across the road from where this weeks’ Sepia Saturday prompt photo below, was taken. It comes from the National Library of Wales, and  shows the bridge in the Winter of the previous year, in thick fog which appears to cut it in half. 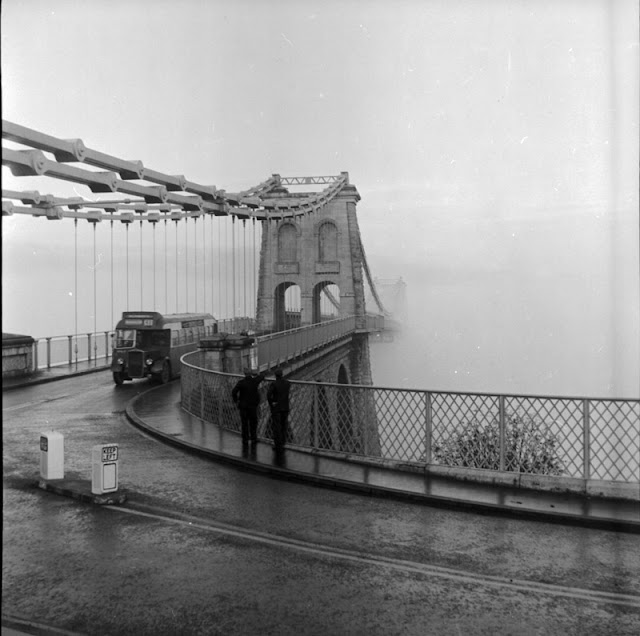 Help bridge the gap by joining other contributors to this week’s Sepia Saturday.