To Dorothy, with love from Maude

The message was inscribed on this photograph. Also written on the back is “16th August 1915”, tomorrow’s date, exactly one hundred years ago.

The photo is tiny and cut from a postcard, which probably had several more of the same image to give to friends and family as mementos. It’s my Great-aunt Maud, who would have been almost twenty-two when this official studio portrait was taken, and working as a Lace Hand. Two years later, In 1917, the Labour Corps Offices opened in Nottingham and Maud became one of 1,400 clerks dealing with army records. I told this part of Maud’s story in Another Day at The Office.

I can just make out the words, written on the back, very faintly in pencil, and this time she had added the final ‘e’. We have both ‘Maud’ and ‘Maude’ on various documents in the family. The 16th August 1915 was a Monday, so it was probably exchanged with her friend when she arrived for work that morning. How it came back into our possession we can only guess. There is no Dorothy in the family.

This is the only photograph we have of Maud at this age and I like to think she would also have given a copy to each of her brothers. Maud was the only girl of three children born to my great grandfather, William, and his wife Mary, and she was just nine years old when their mother died, leaving Maud, Sydney, my grandfather, who was four, and their brother, Albert, aged seven. They were brought up by their father and his sister, their beloved Aunt Lizzie, until their father re-married in 1912.

The boys had both joined the army at the beginning of the War when my grandfather was only sixteen, and Albert just a couple of years older. Maud must have been very worried about them. Great-uncle Albert joined the South Notts Hussars and later the Royal Flying Corps and his story was told in The Two Alberts Memorial.

Sydney, my grandfather, had joined the Robin Hoods Battalion of the Sherwood Foresters and earlier that year they had transferred to Luton, and then Dunstable, for further training.  In August of 1915, my grandfather and his pals undertook a two-day march to Watford and the final preparation with 178 Brigade for front line duties. In fact his first experience of fighting did not come until a few months later, just after his eighteenth birthday, when in 1916 the battalion was dispatched to Dublin to suppress the Easter Rebellion.

The photographs below, which have recently come into my possession, show Syd, probably in his new uniform, issued in August 1915, just a few months past his 17th birthday, when he thought he was off to the Front Line. He looks so young, and very different from his portrait at the end of the War, after his experiences in Dublin and France. 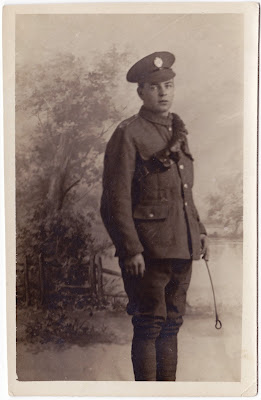 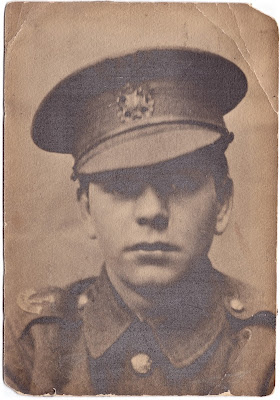 The Robin Hoods were still in Dunstable the weekend before Maud signed her photo, and the Nottingham Evening Post for Saturday 14th August shows a picture on its front page of  “The Men Who Help to Feed the Robin Hoods - a photograph of the men who do the work of cooks for our men in Dunstable”.

The newspaper clippings can be viewed in my Flickr Album

So, now that I have a few facts, photos and newspaper clippings, I can let my imagination have free rein. It’s exactly one hundred years ago, and my Great-grandfather was going home from his job as a lathe turner that Saturday, with a copy of the Evening Post, and pointing out to his wife Gertie, and to Maud, the picture of the Dunstable cooks. Perhaps there were a few words about Syd at least being well-fed. He would certainly have been very much in their thoughts. They probably wondered how Albert was getting on as well - wherever he was.

Also in that edition of the Evening Post was a notice about the first National Register, due to take place next day. Unlike the census this was the responsibility of every member of the household between the ages of 15 and 65 years to complete individually. Gertie and Maud would have had white forms and William a blue form. Perhaps those forms were sitting next to the clock on the mantelpiece, as a reminder of the job to be done next day. I wonder if Maud filled hers in before church in the morning, or before Sunday School, where she taught in the afternoon, or when she came home on her one ‘day of rest’. William would take the dog for his weekly bath in the River Trent in the morning and then have a pint in the local pub, whilst Gertie got the Sunday dinner ready. Perhaps they all sat round the dining table after dinner and filled the forms in together.

It wasn’t all doom and gloom; in those days Nottingham had several cinemas and then, as now, was famous for its theatres. Perhaps Maude and Dorothy went that Saturday, with other work friends, to the Royal Hippodrome to see, ‘A Daylight Robbery’ or to the Empire, where for as little as 3d they could watch a variety show. A Charlie Chaplin film was showing at the Picture Palace, Goldsmith Street, with five performances that Saturday. Nearer to home, at the Pavilion Gardens,Trent Bridge, the Pastoral Players were giving their last two performances.The Tea Balcony was open from 4.30 to 7 which may have made that the more appealing option. Perhaps William, Gertie and Maud went there together as a reward for working hard all week, to lift their spirits and to take their minds off the boys for a while.

On their return Maude may have written to her brothers and enclosed one of the small photos she had collected that day, probably from Gales on Clumber Street. My Great-grandfather, who loved to read, would have been quite happy with his pipe and a good book, after he’d finished the crossword in the Evening Post. He may have taken the dog for a last stroll. Tomorrow was another day and there were those forms to fill in. My grandfather would have wound up the Mantel clock and checked it against his pocket watch before retiring.

For more imaginative tales and sepia photographs, join us at Sepia Saturday.