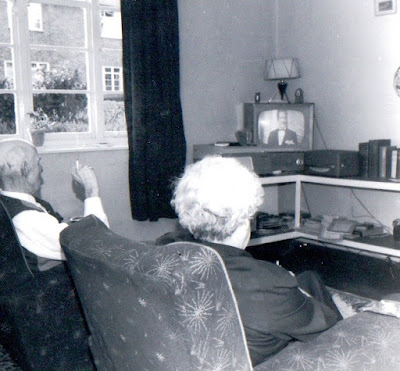 This photo of my grandparents 'watching the Box' (TV) at our house, was taken by my father, somewhere around 1962 I think. Dad liked to take unusual pictures and he clearly had crept up on his parents whilst they were engrossed in this TV programme. I think I can identify the comedian Ted Ray, who was better known for his radio shows.  Long before colour had arrived, this small TV set was rented from Rediffusion , because that’s what you did in those days. 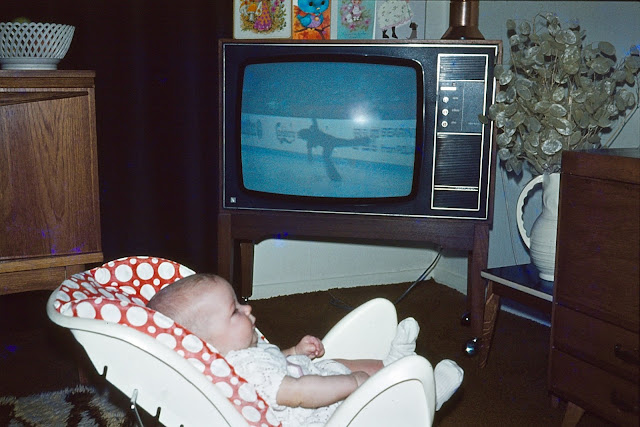 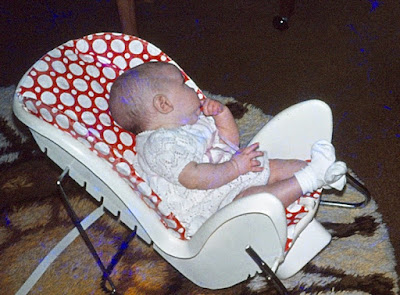 Years later we had graduated to a better model, although still renting from Rediffusion, as can be seen in the picture of our daughter aged four months. I can pinpoint the date with some confidence to Sunday 5th March as those are Mothering Sunday (as it was still known in those days) cards on top of the TV.  I know, because I made the one on the right.  We would have been visiting Mum and Dad in Nottingham from our home in Lincoln, a few miles away.


My daughter is watching the World Figure Skating Championships in Ottawa, Canada, which were held from 1-6 March 1978, and that’s probably Robin Cousins skating for UK. He went on to gain the Bronze medal and I think we were all as transfixed as she was.


I used the term ‘watching the Box’ at the beginning of this post and I think it’s probably a peculiarly English term. We still ask ‘What’s on the Box tonight?’ and I know it’s not very correct but it’s a way of acknowledging that this clever box is held with some affection. We use it not just to entertain and pass the time, but sometimes as a way of diverting attention. My grandparents weren’t great conversationalists and the TV would have been a boon to my parents whilst they got on with other chores. 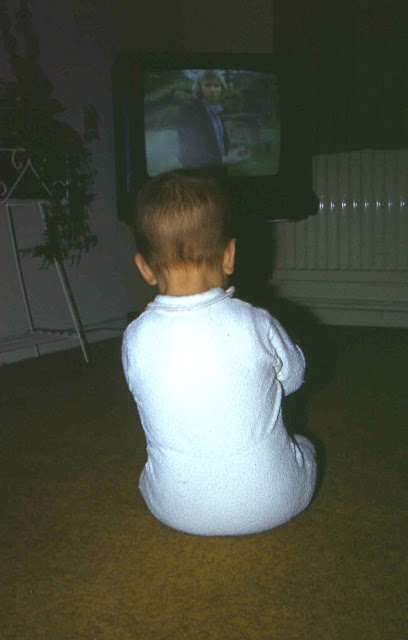 Like many other mothers, then and now, I’m guilty of sitting my children in front of the Box whilst I too grab a few minutes to myself. In this case I had obviously left our young son, aged eight months, in the care of his grandparents. This is another of my Dad’s photos and my Mum has carefully written the date on the back; 14th March 1980. I love this photo for two reasons; one because it shows the back of my son’s ‘baby-neck’ - not a view most doting parents would choose to take. You know what I mean by ‘baby-neck’ don’t you? There he is all ready for bed, having been fed and bathed and smelling of baby powder. Even now I can remember the sensation of nuzzling there and my feeling of maternal love rises to the surface.

I’m also fond of this snapshot because my son is watching Michael Wood, the TV historian, on whom I had a quite a crush, especially when he spoke in old Anglo Saxon. His skinny blue jeans had nothing to do with it - it was his mind that made my heart flutter. Remember, I was still in my twenties. When I see him on the Box these days, it’s definitely the history that has me enthralled; a man who is as clever as the box from which he reaches to his audience. 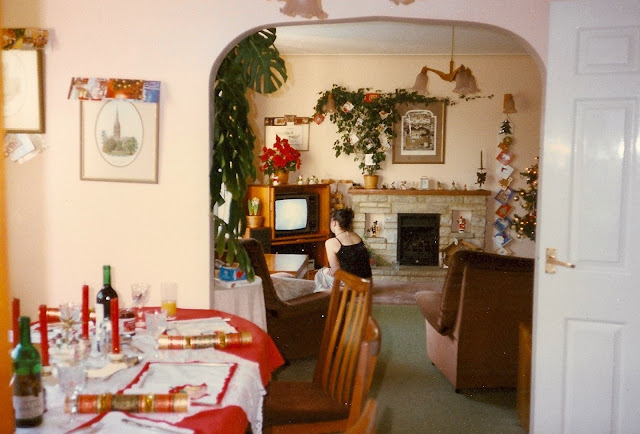 My final photograph is, no surprise, another of my Dad’s. It’s that little girl in the baby seat all grown up. She’s killing a few moments as she waits for us all to come to the table for Christmas Dinner. She doesn’t need to sit that close, but at a guess, she’s watching the Christmas Day edition of ‘Top of the Pops’; it certainly wouldn’t be The Queen’s Speech!  This time the TV is housed in a cabinet, a box within a box, and it had a door which you could close when you weren’t viewing, to make it look part of the furniture - now that IS clever. This is 1996 in our old house in Salisbury. and once again I’m filled with happy memories when I look at this photograph.

Why not join us for this week’s Sepia Saturday, for more happy memories. Some contributors may even be thinking outside the box. Happy viewing!