A Day at The Races


The three men in the photograph look a little anxious. They’re at the races in Brisbane in 1939, dressed in suits and hats and carrying binoculars. Perhaps the race is about to start and the adrenalin is beginning to flow. Once it’s under way they’ll be chewing their lips and gripping their binoculars with sweaty palms and white knuckles, shouting and screaming as they will their chosen horse to the finish. What a pity we can’t see the ‘after’ picture. Will they be crestfallen and ashen-faced, when they realise they’re going to have to go home and explain to their wives that they’ve just lost everything? Or perhaps they’ll be throwing those hats into the air and shouting “Yipee!”- we’ll never know. They’re a good match for this week’s Sepia Saturday photo prompt, which also features three Australian men in suits and hats. The prompt picture is possibly of the annual stud sales by the Commonwealth Wool and Produce Company in Sydney in the early 1930s, so the men would be attending to see what the sheep stock was like rather than studying the horses’ form.

‘A Day at The Races’ was a famous 1937 Marx Brothers film and later the rock group Queen named one of their albums after the movie (following on from their previous album, ‘A Night at The Opera', also a Marx Brothers film). The film’s ‘disjointed plot line’ revolves around horse racing and is full of scams, comic routines and musical numbers.


The entire film is available to view on YouTube, as are many well-known clips, such as this one featuring the famous ‘Tutsi Fruitsi Ice Cream’ scam which foiled Groucho’s attempt to place a bet on his chosen runner. 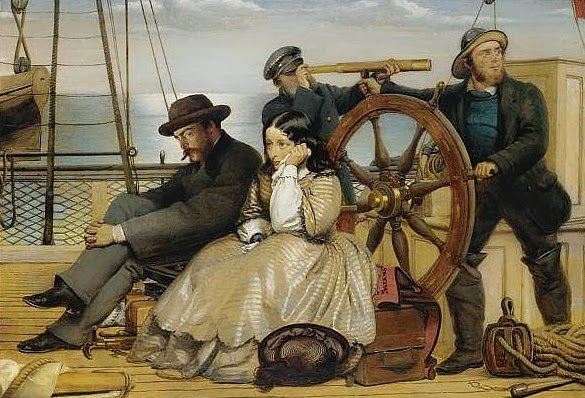 In my final image the three men in hats are again caught up in the world of horse-racing. How do we know this? The clues are in the picture itself. Like the painting in my previous post, 'A Piano Lesson', I found this picture in my copy of John Hadfield’s delightful book 'Every Picture Tells a Story’. In 2008 the painting was sold from a private collection and the catalogue notes written by the then owner, Sir David Scott, use John Hadfield’s wonderful description to shed light on what is going on in the picture. As before, there is more to this scene than meets the eye and a reading of those notes together with Hadfield’s quirky and humorous description make us look at the details to try and discover just what is going on in the scene. The painting is attributed to Charles Rossiter and is thought to be inspired by Ford Maddox Brown’s ‘The Last of England’ . Unlike the latter, the two escapees in this painting are ‘on the run’. Would you have noticed the copy of 'Bells’ Life in London’ (and Sporting Chronicle) lying on the deck below the man’s knee, unless I had pointed it out to you? Of course not, and neither did I until I read the book and the catalogue notes. There are many connotations to be drawn from this painting but what is undeniable is that the young man has, in Hadfield’s words, “come a cropper on the turf”. In other words he is running away from his creditors. To find out more of how Hadfield and others, interpreted the minute details, such as the letter in the woman’s lap, the bundle of hunting whips and the cash box, click on the link to the catalogue notes. The abject misery on the faces of the couple shows that they wish they had never spent ‘A Day at The Races’.

For more tales of trios of well-suited and hatted men, race over to Sepia Saturday and see what other Sepians have made of the prompt.

* courtesy of Dr.Macro.com
Posted by Little Nell at 12:09