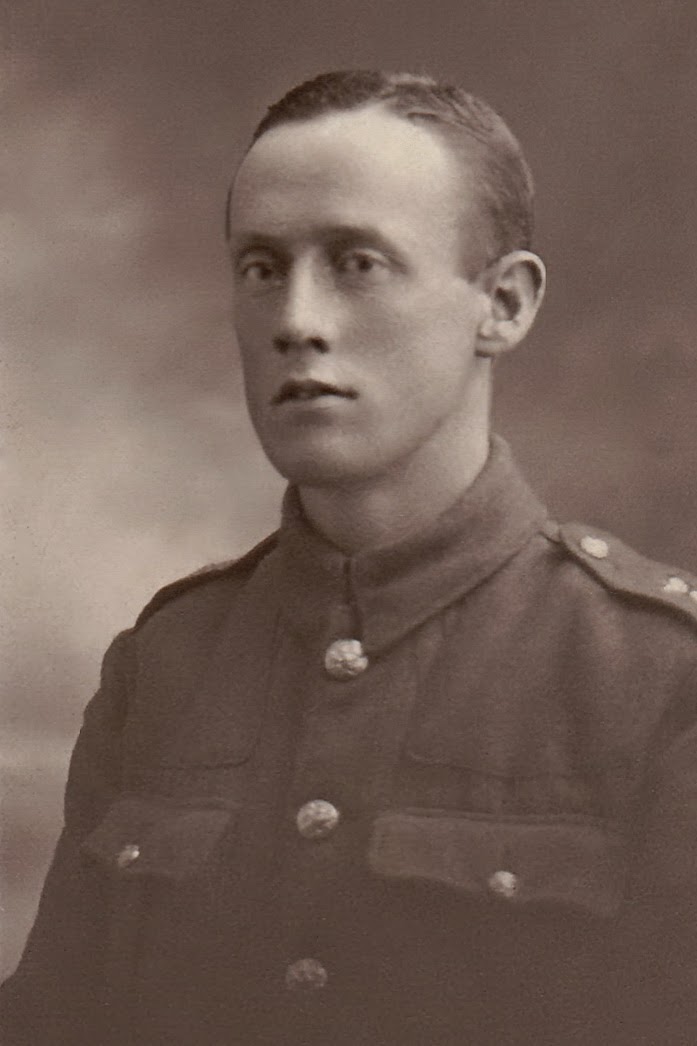 This young man is my grandfather (b.12th March 1892), my dad’s dad, always known to me as Granddad Sam. I wasn’t as close to him as my other grandddad, Sid, who has often appeared in my blogposts, and he was always a bit distant with me on the few occasions I can remember seeing him. I have no recollections of fun or storytelling, as I do with Sid, so I was surprised to read a postcard, signed from ‘your loving brother Sam’ and with fifteen kisses added around the edge.

I am indebted to my brother for the information on how Sam spent the war. He did the research and helped to give me and our families a picture of how Sam spent WW1.

As far as I know we only have one photo of Sam as a lad, seated, with his sister and his dog, in a family group in which the head of one of the sitters has been removed!

Sam joined the Northumberland Fusiliers in 1914, probably with a pal, as his two brothers and his Brother-in-law all joined the Royal Engineers. He mentions Ted Hicks in the postcard, related in some way to his brother-in-law Jim, so perhaps he was the friend who joined him at the recruiting station. Sam's army record was lost, with so many others, in the Blitz of 1941. However, we can be sure that he served in the 10th or 11th Battalion, 68th Brigade, of the 23rd Division of the British Army. The Brigade spent the early part of the war training and some of the infantry, building up defences of South London.

Between 21-26 August 1915 the Division landed at Boulogne and thereafter served on the Western Front until late 1917, when it moved to Italy. The picture below, of Sam’s platoon, was probably taken before they left for France as there is no evidence of long service chevrons or wound stripes

On arrival in France the Division took responsibility for the front line sector at Bois Grenier where they spent the next five months, until relieved the following February. During the rest of 1916 Sam saw action at various locations on the front at the Battle of The Somme, and at the end of the year the Ypres Salient, where in 1917 he saw further action at the Menin Road and Passchendaele.

In October 1917 the Division undertook the long journey to Italy to support the Italian army. They were placed in a front line section at Montello, facing the Austrian Army, where they stayed until March 1918. There were no major incidents, but there was heavy shellfire to endure as they worked to strengthen the position. The next move was to the Asiago Plateau, where the Battles of Asiago and Vittorio Veneto are recorded in the War Diaries of the Northumberland Fusiliers.

After the Armistice the Division moved to a billeting area west of Treviso and the troops were gradually returned to Blighty. Sam sent this card to Cis (Sarah, his sister) in February 1919, just before he was sent home. 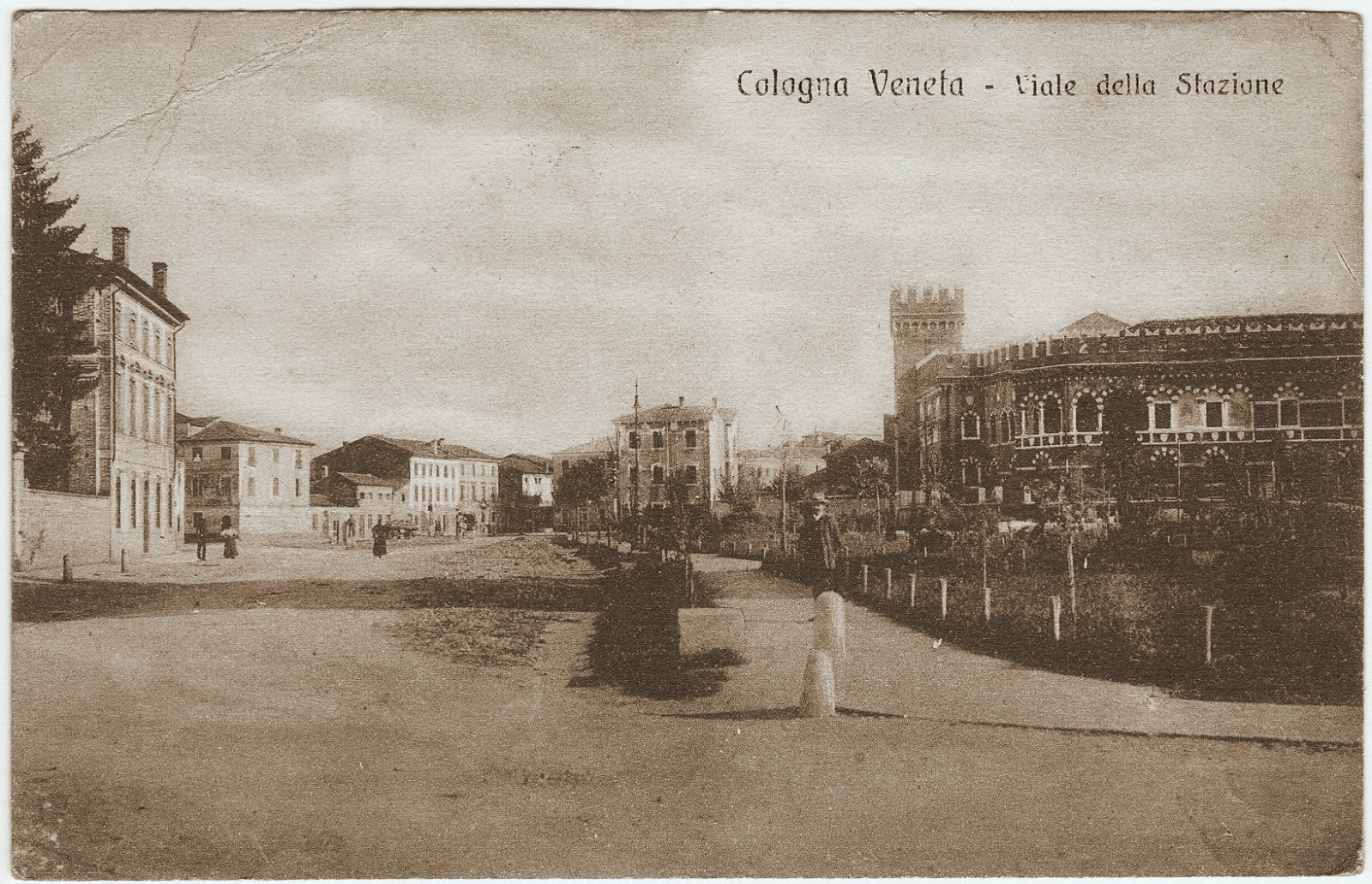 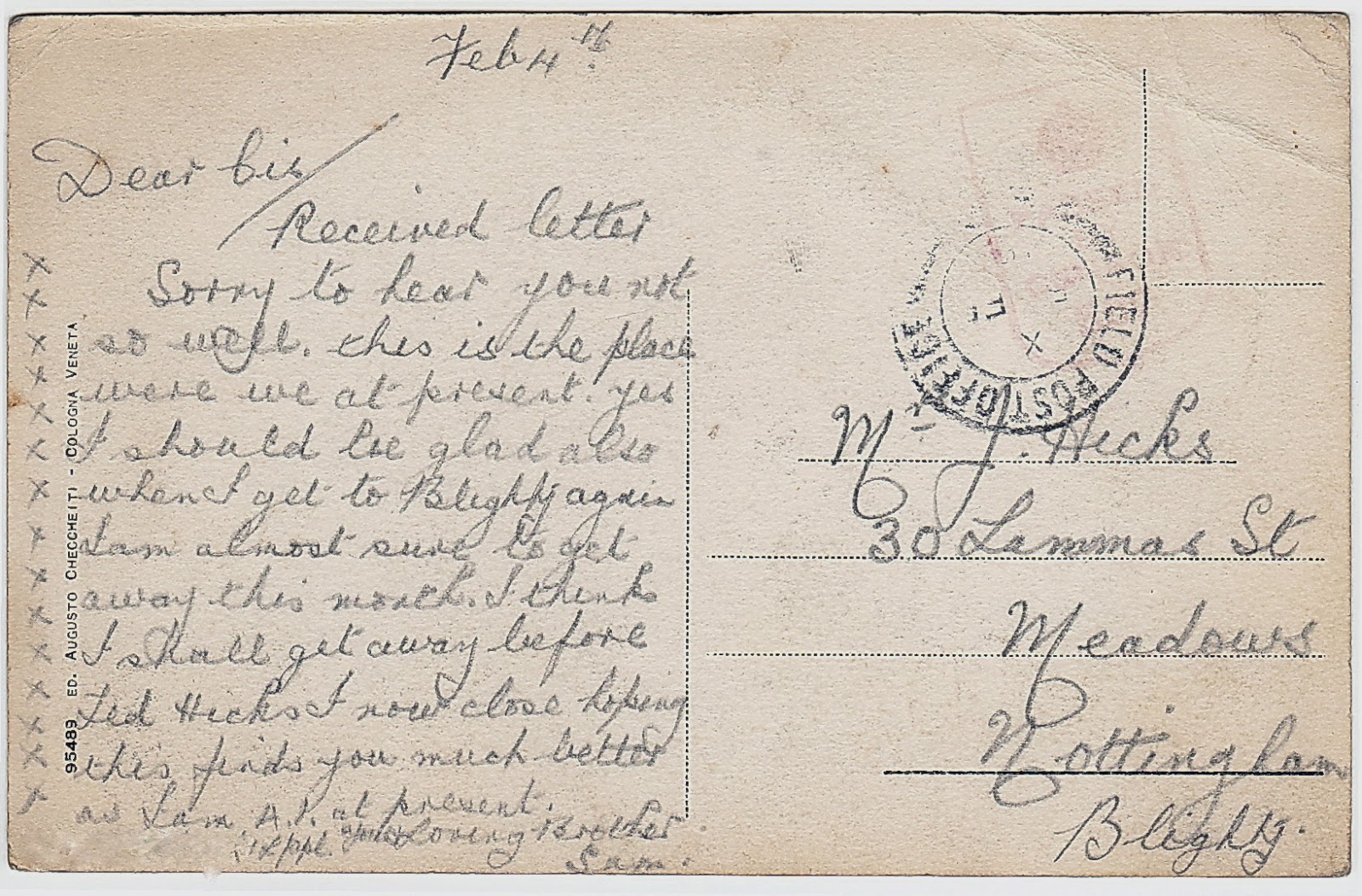 A man of few words was Sam, both spoken and written, but he was clearly fond of my Great-aunt Cis, his elder by seven years. When Sam’s mother, Lydia, died, he had gone to live with Cis and her husband Jim at Lammas Street. After the war, he brought his new bride to join him there for a while until my father was born, when they moved to a place of their own a few minutes away.

This week’s Sepia Saturday prompt is a soldier of The Great War, commemorated in the Faces Project of the Imperial War Museum. He was just an ordinary soldier but, unlike Sam, he went missing in the Battle of The Somme. We were lucky that Sam, another ordinary soldier lived to found our little branch of the family tree.

To see more stories of ordinary and extraordinary men and women of the First World War, which began 100 years ago this year, visit other participants in this week’s Sepia Saturday.

Email ThisBlogThis!Share to TwitterShare to FacebookShare to Pinterest
Labels: sepia, The Somme, WW1