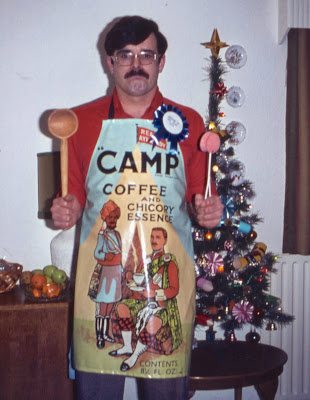 Christmas 1975, and here’s my husband in his New Year’s Eve outfit. The theme of the party was rôle reversal, and we were asked to dress in the style of an occupation normally undertaken by the opposite sex. My husband is demonstrating the ‘domestic drudge’ look, hence his down-in-the-mouth look. I’ve no idea what the rosette he is sporting has written on it, some witty comment designed to draw snorts of laughter from his brother officers no doubt. Yes, this was an RAF Mess party at Waddington, Lincolnshire, where we were stationed. This would have been deemed amusing nearly forty years ago when women’s lib was just taking off and the PC brigade didn’t have much of a voice.

The very useful pinny has a design which was later to come under fire from the latter. It depicts a label for “Camp” Coffee a very well-known store-cupboard standby and something of an advertising icon.  When we were children, our mothers used it  whenever a recipe called for ‘coffee essence’, and we followed suit when we had homes of our own. Without it coffee cake, coffee icing, coffee kisses etc. would have been much duller, and what would we have used as ‘coffee sauce’ on our ice cream? 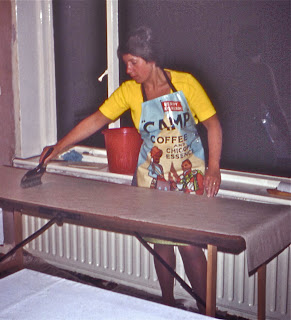 Camp is apparently still available, but back in 2006 the label was changed after pressure was put on the company, citing racism. The new label has the Sikh soldier seated next to the Highlander as an equal, enjoying a nice cup of coffee. Not historically accurate of course, but more palatable to the modern consumer. The slogan on the label was ‘Ready- aye ready’ with the aye being used in the sense of ‘always’, confirming the instant nature of the brew.

The pinny (or apron) was used by me whenever a job called for protection from mess. Here’s me wearing it as I slap on the wallpaper paste and to keep myself out of a potentially sticky situation. I’m newly returned from honeymoon - hence the slight tan- and was probably acting as paperhanger’s assistant. We would have had an assembly line going, with me sloshing on the paste and my husband manoeuvring the wallpaper into position. Being the seventies it was very likely wood chip wallpaper. This was our first home and we wanted only the best! 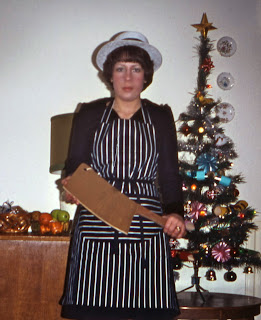 I expect you’d like to see my outfit for New Year 1975 too. Well by good fortune I also wore a pinny. Here I am dressed as a Lady Butcher, meat cleaver (cleverly fashioned from hardboard) in hand. Striped apron and lightweight plastic boater. I’ve no idea why I chose this rôle and it’s quite possible that I offended the vegetarian guests, but it was probably based on the availability of costumes. The striped pinny was to hand and obviously suggested itself as a butcher’s apron. The less time we had to spend sorting out our costume, the more time to enjoy ourselves.

I don’t look too happy either. Let’s hope we both cheered up when we got to the party and had a few glasses of bubbly.

For more cheerful pinny-wearers, visit this week’s Sepia Saturday, where this was the theme suggested by the image below. Ready? - Aye Ready!