We are celebrating at Sepia Saturday this week as we have reached our 200th post. Co-incidentally it is also my 200th blogpost on Hanging On My Word. I wasn’t part of the sepia fun at its inception, but now I’m part of the admin team! I decided to share one of my early posts, which is also one of my favourites.
The very detailed pictured provided as a prompt for this week’s Sepia Saturday, shows a shop doorway in Sydney, Australia in 1934. This sent me delving into my father’s side of the family, where I knew that at least three of them had been shopkeepers. It’s amazing what a little research for a blogpost will nudge, quite literally, into the frame. I had always been aware of a blurry sepia picture of my great-grandfather Sydney (Dad’s Grandfather on his mother’s side) standing in the doorway of his fishmonger’s shop in Nottingham. My older brother knew a few more details but also provided me with three new pictures I had never seen before. The first of these is the one I like best; the nonchalant pose is not one I’ve ever seen adopted by a 'sepia shopkeeper' before! 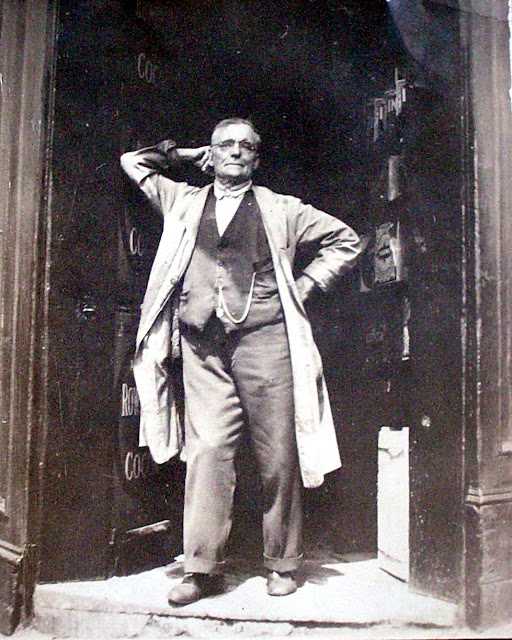 Now, I know this isn’t a fishmonger’s, it appears to be a grocer’s, so we have a bit of a mystery. Could it be two windows of the same premises? Behind him, in the shop, can be seen tins of biscuits and other dried goods which would have been his stock-in-trade. 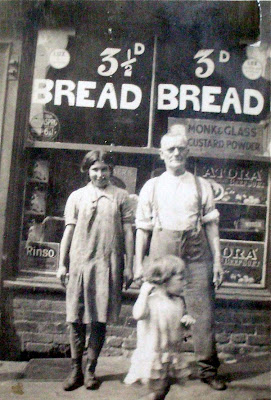 A second picture appears to confirm this, though he doesn’t look quite so dapper here; waistcoat off and sleeves rolled up. The child beside him is a friend of the family and the other youngster just happened to have run in front of the intended subjects, as small children so annoyingly can when a shot is being posed. No digital cameras then, and films were precious, so once the shutter clicked it would have to do. This picture seems to pre-date the next one as my Great-grandfather looks a little younger, but it’s interesting to note the price of bread is the same as that in the Sepia Saturday prompt. The shop reminds me of the one kept by Arkwright in the TV series ‘Open All Hours’. I wonder if it had a similar lethal till (cash register). I talked to my 90 year old father about the fishmongers on Manvers Street, Nottingham. Dad remembers his Grandfather also sold rabbits, and my Grandmother (one of his fourteen children) as a girl, had the job of skinning them. There was sawdust on the shopfloor to catch the blood . 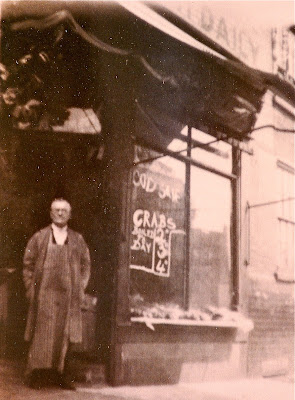 Here’s the picture of my Great-grandfather which started me on this quest. Now we see him in yet another working outfit, complete with striped apron, from which he would produce a halfpenny when my Dad visited as a child. The window advertises cod and crabs. I’m told this was Jubilee Day 1934, and the bunting can just be seen above the window and door.

My Dad, who was a travelling salesman, also inherited the selling gene from Lydia, his Grandmother on his Father’s side. At some time around the turn of the twentieth century we know that she had what Dad called a ‘Bread Shop’, but I don’t think it was what we would now know as Baker’s. It was more likely a corner shop, typical of many a street in town and village at that time. The shop would provide those commodities needed by people with little income, who   had only to walk to the end of the road where they lived to buy a loaf or a packet of tea.

The last picture is of yet another member of the family. The lady in the doorway is not Lydia, who died in 1910, but her daughter Sarah (born in 1885). This picture was probably taken in the late 1920s or early 30s. She was my Dad’s Aunt ‘Cis' who would later run a sweet shop in Delta Street. Cis would have given up her original skilled job, which according to the 1901 census, was that of a lace-hand in Nottingham’s famous lace industry. I like the way the children in the street have engineered to be in the photograph; it makes it all the more interesting. The little chap is being given a ride on a bike which is far too big for him - he could never reach the pedals. On the other hand it seems too small for his older sibling. There’s another smaller bike on the right, face on to camera. What do we think the youngster on the left is doing? And no, he’s not sending a text! 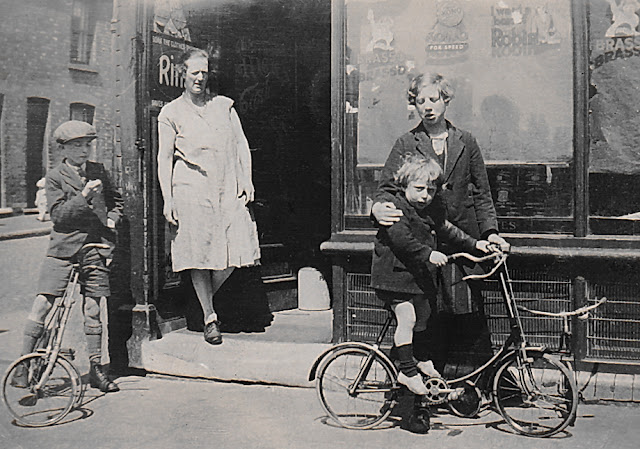 I asked both my parents about the sweetshops of their childhood. Dad recalled Pontefract Cakes, Marshmallows,Tiger Nuts, Turkish Delight and Barley Sugar sticks. Mum remembered that when she was a little girl in the 1920s, she would visit a shop run by the Misses Mackintosh on Tealby Terrace, Nottingham, where 2oz of sweets would cost one penny and a bar of chocolate would be tuppence. There would be fruit drops, dolly mixtures and liquorice sticks. Mum loved walnut whips (a rare treat) and sherbert fountains. “Do you know, she said, I haven’t had one of those in years. I wonder if you can still get them. I’ll look out for them next time I’m out shopping.” Mum will be 91 in November, with a wonderful memory for the small details of her childhood. "Aniseed balls,” she said, “We used to suck them until they changed colour, and we’d keep sticking our tongues out to each other to check.” She also recalled her friend Tommy who always gave her the little toy from his ‘Lucky Bag’ for her Doll’s House. The simple pleasures of childhood.

To see what other Sepians have chosen as their favourites, take a look at Sepia Saturday 200 and join the celebrations.
Posted by Little Nell at 08:20