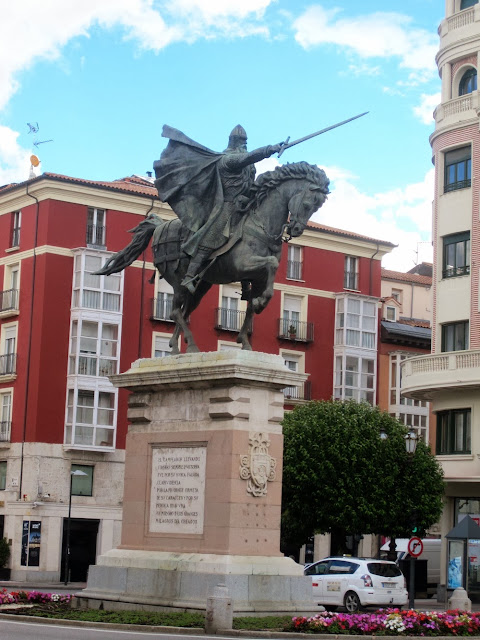 There he is, El Cid himself, riding high in the city of Burgos, the former capital of Castilla y León in Northern Spain, where the legendary hero lies buried in the Cathedral. He didn't bear any resemblance to Charlton Heston in the film, but this was an imposing monument to Spain's national hero. I was glad to have seen him but more pleased still to meet someone I had hitherto only known through our shared interests on Sepia Saturday. 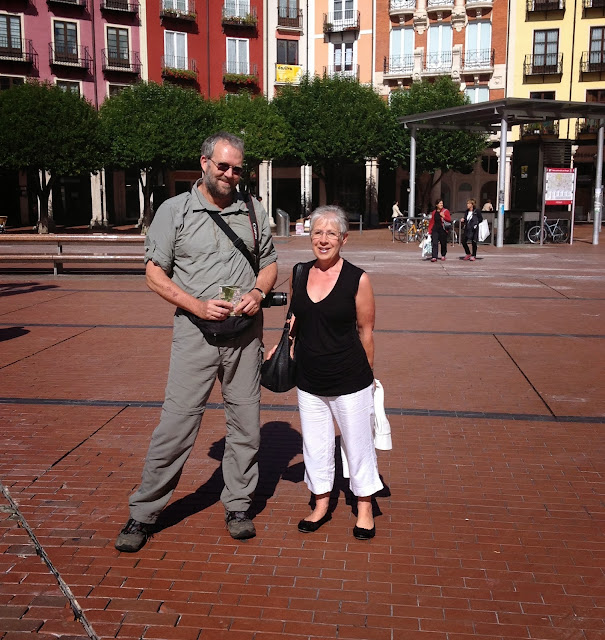 By careful planning we managed to ensure that our tour of Northern Spain last week landed us in Burgos on the same day as Brett Payne, better known to you all as Photo Sleuth. Brett is currently walking the Santiago de Compostela pilgrim route and was having a couple of well-earned rest days.  Brett lives in New Zealand and we live in Lanzarote, off the coast of Africa, so we consider it a feather in Sepia Saturday's cap that not two, but three Sepians managed to get together in this way. In case you're wondering Caminante (occasional Sepian) took the picture, but as I live with him anyway that bit was easy. Here we are having just met under the clock of the Ayuntamiento (Town Hall).


We explored the city together and stopped to  gaze at the ornately spikey Gothic cathedral and the Casa del Cordón, where the Catholic monarchs welcomed Columbus after his second Americas expedition. The house is named after the monk's ropes, carved in stone, hanging over the door. 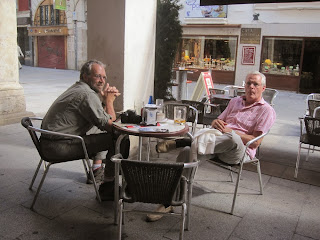 We stopped a couple of times for a snack known as Pinchos, or Pintxos (in Basque), a beer or coffee. It was very hot and we were pleased to find a little shade in this arcade, whilst we chatted away and got to know each other a little better. I'm pleased to report that Brett is just as nice as he appears in his weekly Photo Sleuth submissions and his Facebook comments for Sepia Saturday. 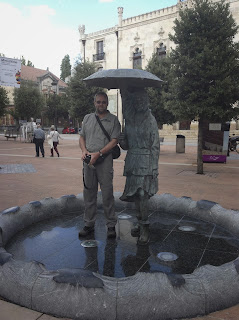 All over Northern Spain there are wonderful statues and fountains in the streets of even the smallest towns. Brett offered to be photographed sharing this young lady's umbrella; fortunately the fountain was switched off at the time.

We had no idea that our visit coincided with a Medieval Festival, but it turned out to add a whole different dimension. Sepia Saturday likes anything old and here in Burgos, and the next day for John and me, in León, we found that the place was steeped in history; ancient streets with balconied buildings and medieval churches. The festival gave the city's proud inhabitants the chance to let their hair down and celebrate their traditions and regional produce whilst dressing up and generally having a good time. 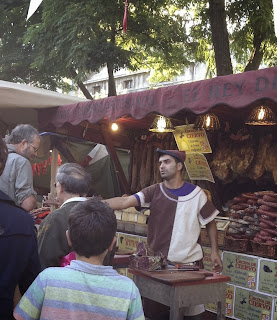 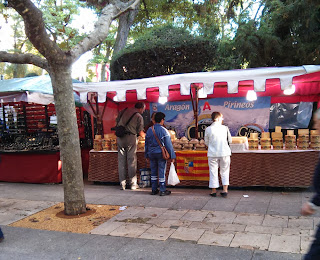 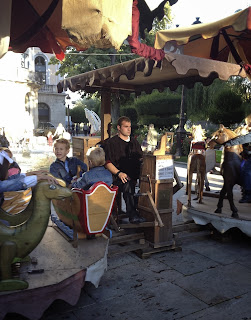 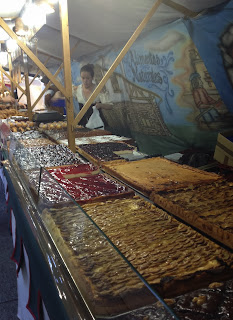 Hard to resist the many food stalls; Brett chooses some local cheese for his lunch next day and samples some proffered local ham.


Don't even think of your diet; just look at the tarts and pastries on display here. 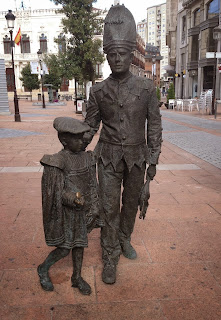 You could burn off the extra calories perhaps by taking a turn at a 'medieval' carousel, worked entirely by pedal-power. As Brett was giving his pilgrim's legs a rest, he politely declined my suggestion that he offer his services. The young man running the machine was clearly having so much fun it would have been a shame to deprive him.

Here's another young man, but this little troubador is being shepherded by his dancing master along one of the main streets of the city. We found we were constantly stopping to admire these statues  and to enjoy the details and humour.

The one below was dedicated 'A nuestros mayores con el carino y el respeto que merecen' - 'Our elders with the affection and respect they deserve' in November 2009. I love the fact that the grandma is a crocheter like me. Sadly her yarn basket was a bit soggy due to a recent rainfall. 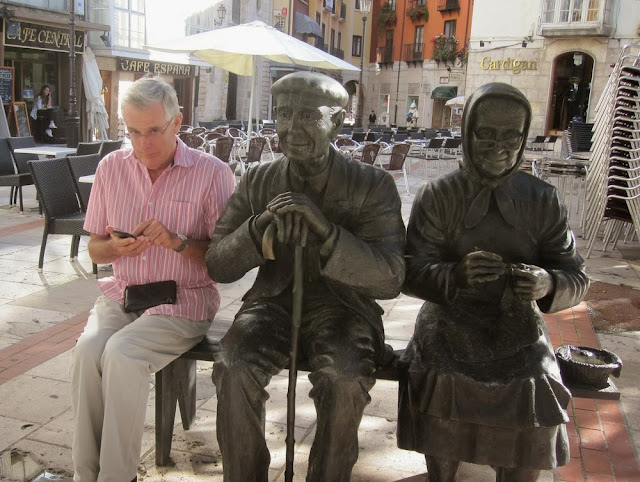 Brett encouraged John to join the group and show them what a senior really looks like! 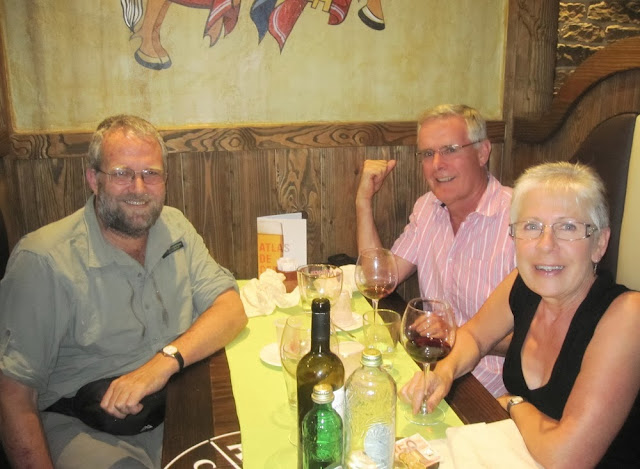 By now we were ready to sample the Pilgrims' Menu at a local restaurant. Very basic; three courses, with bread, water and wine for about 16 euros.  All too soon it was time for us to go our separate ways as Brett needed a good night's sleep before a very early start next day. We asked our waiter, now making his way out of the door dressed in his medieval costume, to take our picture. Here you have it, three Sepians together; Photo Sleuth, Caminante and Little Nell, hoping to meet again in real life one day- who knows? 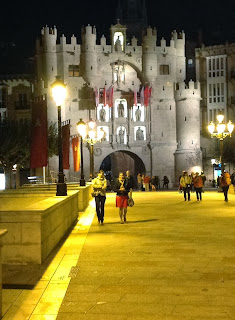 Sepia Saturday this week has a picture of a ship being launched as a reminder that it is hundred years since HMS Queen Elizabeth was launched at Portsmouth. Alan says:

A backward glance at the city gate of Burgos, illuminated for the evening, as we made our way back to the hotel, and a reminder of a very pleasant day spent in good company  and the celebration of a new friendship - will that do?

Join other Sepians as they share their own celebrations, and whatever you do, don't be like ships that pass in the night.
Posted by Little Nell at 23:45