The Mother of Invention

Oh for a Muse of  fire, that would ascend
The brightest heaven of invention!
Shakespeare Henry V 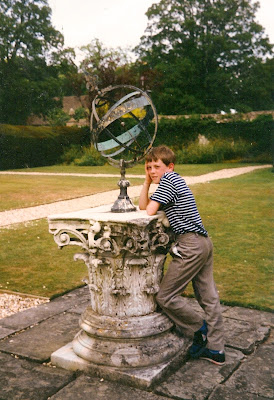 The Prologue in Shakespeare's Henry V is calling for heavenly inspiration to assist the creative imagination. In 1990, during a visit to Avebury Manor, Wiltshire, my eleven year old son posed beside an unusual mechanism. Not the sundial we are used to seeing in the grounds of English country houses, but an astrolabe, an ancient form of calculator used in astronomy. I'm not sure what its provenance was at Avebury, but presumably, one of its many owners since its construction in the 1500s, had an interest in the heavens. Perhaps he too was seeking inspiration. A year after the picture was taken, the house came under the protection of The National Trust, and much restoration and conservation work has been carried out. I do hope the astrolabe was preserved. You can inspect it more closely here.

Nearby, the biggest stone circle in the world at Avebury, forms part of a larger complex of Neolithic and Bronze Age monuments; West Kennet Long Barrow, Windmill Hill and Silbury Hill, together described by English Heritage as, "forming a huge 'sacred landscape', whose use and purpose can still only be guessed at. Avebury and its surroundings have, with Stonehenge, achieved international recognition as a World Heritage Site." Not surprising then that the astrolabe was sited at Avebury Manor, which would seem an auspicious place for watching the stars.

More information has since been provided by 'Willow' who writes a blog about Haunted Wiltshire (where you can read about the Manor's ghosts) and one about Avebury Manor. He asked the National Trust curator, and kindly sent me this:

'Known as an astrolabe or armillary sundial, they were designed not only to tell the time but also models of objects in the sky, measuring longitude, latitude and other astronomical features.

Our example is made of a copper alloy, probably bronze, and positioned on a composite capital, which incorporates Corinthian and Ionic features. The instruments of measurement have long disappeared or were never present - it's certainly non-functional. It's definitely been present since ownership by the Marquess of Aylesbury, Mr Brudenell-Bruce but the exact installation date is unknown. The Manor guidebook of that period describes it as dating to the 17th century although it is unlikely it was installed at that time.' 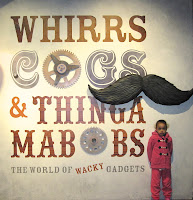 More recently, on a visit back to UK, we went with my son's family to the Naval Dockyards at Chatham. There was an exhibition there called 'Whirrs, Cogs and Thingamabobs' and we had an interesting hour marvelling at some very strange inventions. Here is my granddaughter at the entrance. The gadgets were amassed by one man, Maurice Collins, who has been collecting them since 1976 and recently won TV's Best British Collector award. They cover items from the Great Exhibition of 1851 to the Festival of Britain in 1951, and include an eye massager, a self-pouring teapot, a 'laptop' of the1920s and a sandwich-box camera. 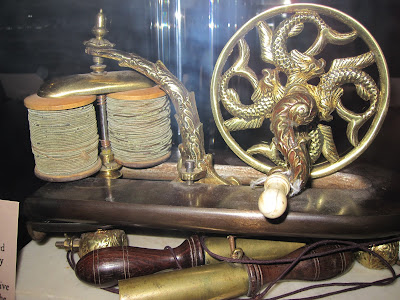 This rather beautiful machine was devised to help cure all ills. It worked very simply be holding onto the two metal pieces, and when the handle was turned it would give an electric treatment that would make the user healthy.

If this has whetted your appetite for strange inventions, you can view the rest of the photos on my Flickr page.


This week the cogs of our brains whirred as we sought amazing contraptions amongst our images to match the prompt in Sepia Saturday. If you want to see how inventive other contributors have been take a 'great leap forward' and visit the blog. Be assured that dressing like an inventor is not compulsory! 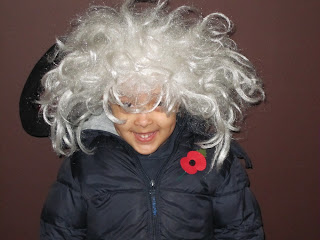 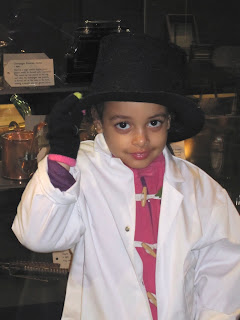 I think my grandson may have been trying out the gadget  above.