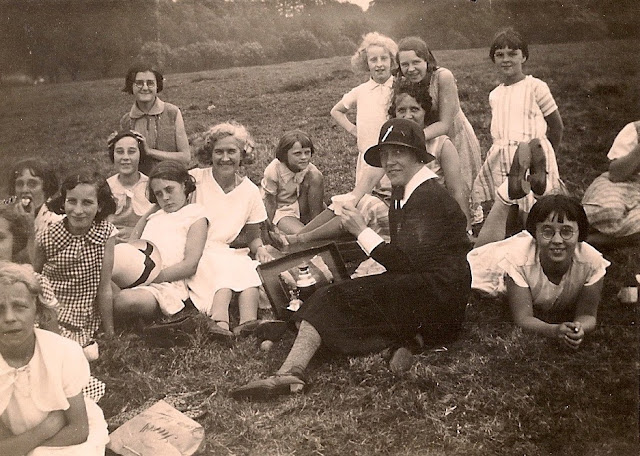 Here's my Mum (b.1920) on a Sunday School picnic, aged nine or ten. She's looking a bit sad, clutching her hat and leaning on her Auntie Maud. Regular readers will already know about my Great Aunt Maud, who ran Sunday School classes amongst her many other activities. In this picture Maud is in her mid-thirties and obviously good company. Mum tells me the picnics would have been close to home; somewhere they could walk to easily, perhaps the Embankment in Nottingham. Some doubt has been cast on the location since my original post, and suggestions have been made of Gunthorpe (which Mum is dubious about as this would have cost money and no-one had any to spare!), Colwick or Wilford. I'd love to hear from anyone who can shed some light on this.

Mum thinks the lady in uniform was a member of the Church Army, and known as Sister Whitehead. Most of the girls look cheerful, apart from Mum; they'd probably just had their picnic, although the girl on the left is still eating. The brown paper bag in the foreground probably had some buns or 'rockcakes' from the local baker and Sister Whitehead seems to have had charge of the Thermos flask of tea. She probably needed it to help keep her cool, as she seems a little overdressed, with dark clothes and thick stockings. 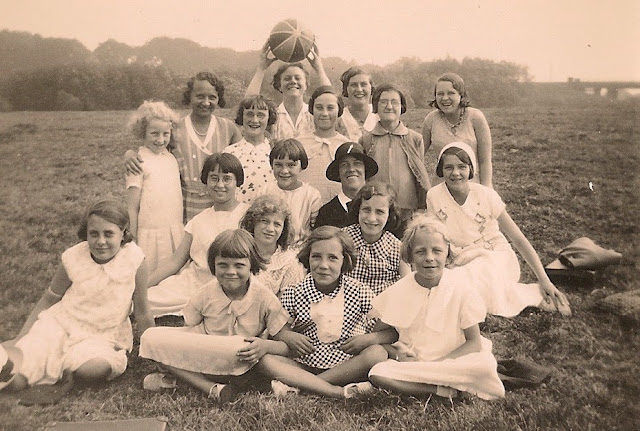 In the second picture, apparently taken by Maud herself, Mum seems much happier; perhaps it was the prospect of a ball game. The smiling lady with the pearl necklace was Maud's lifelong companion, Mary, who first appeared as a little girl in my post, In Her Sunday Best. 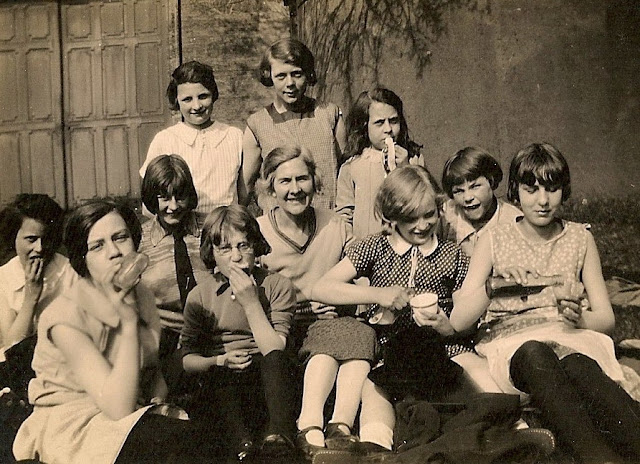 The third picture is taken on a different occasion, when Mum was a little younger. She's the one eating a banana. She tells me that the girls would have been drinking cold tea, which would have been transported to the picnic in a bottle wrapped in a cloth, if no thermos flask was available. Maud is in the centre of the picture, so perhaps her friend Mary was the photographer this time.

I've mentioned before that Maud was a hobby photographer who often developed her own pictures and hand-coloured them. Two of her pictures she had made into 100-piece wooden jigsaws for Mum. My favourite, of Mum picking armfuls of bluebells was the subject of one of my first blogposts, Life is a Jigsaw and is still in good condition. The picnic scene is a little less well-preserved, and I'm sorry to say that a few pieces are missing. I've recently found a link to the makers of the puzzle, Jerome (the name appears in the bottom righthand corner), on this interesting site, where one more example can be viewed. You will also find information there about the Jerome studios and a personal recollection of a hand-colourist who worked there. 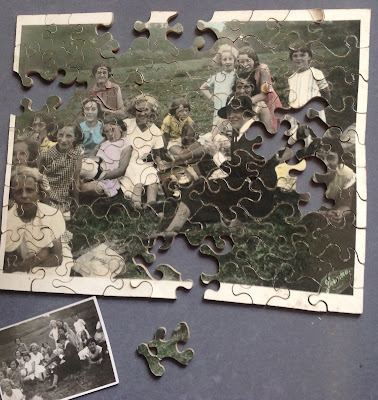 The original pictures are very small, approximately 8x6 cms, so the jigsaw-maker did a very good job of retaining the details.

No two pieces are alike, and despite the simplicity of the scene, it was fiendishly difficult to put together. Wouldn't you know it, there's a piece that just wouldn't go in any of the spaces. It's definitely the grass bank in the foreground, and there's part of Sister Whitehead's shoe on there, but despite appearances it doesn't fit in!

There's probably a story or a poem to come out of that!

There's no need to puzzle over where to go next. The prompt picture for this week's Sepia Saturday was a picnic scene with many theming possibilities. You're invited along to what will no doubt be a feast of responses.