The News in Pictures

A slightly misleading title for my post today perhaps, as it will be the newsPAPER in pictures. In fact it's a family gallery of newspaper pictures. The photo prompt for this week's Sepia Saturday is a group of people sitting on a bench reading newspapers. It occurred to me that there must be some examples where newspapers feature in family albums. These days I read mine on the iPad, which is so much easier. The weekend newspapers in Britain now come with many supplements which are bulky and give the delivery boys and girls muscle strain. Much of the content could not be deemed as 'news', and in this way little has changed from my grandparents' day when The Daily Mirror was their tabloid of choice. 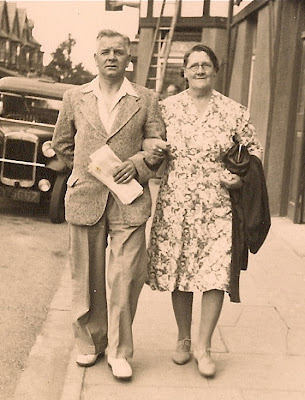 I'm assuming that's what my grandfather is holding in this seaside 'walking' photograph. On the back is stamped 24th July, but no year; I'm guessing Mablethorpe 1952, as there was a family holiday there when I was a few months old and my Gran looks exactly the same as the pictures where I am in in my carrycot. My grandparents were in their mid-fifties and my grandmother was six years younger than I am now, and yet looks so much older. The National Health spectacles and 'comfy' shoes don't help. 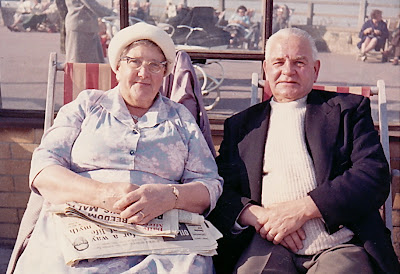 No guesswork needed as to the publication in the next picture; my Gran's newspaper is definitely The Daily Mirror, as the title can be clearly seen. Unfortunately there are no further clues. The word 'freedom' is part of a headline but that could mean almost anything. I don't recognise the picture either. It's another seaside holiday picture, and it was probably Mablethorpe again, as it was easily reached by coach, from their home in Nottingham. They both looks somewhat older and I'd have to guess mid 1960s. They'd both become much stouter by then and it's a testament to the sturdy deckchairs that they were able to support them. 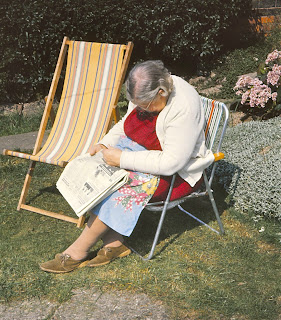 By 1977, when I think this next picture was taken, a few months before she died, my grandmother had been widowed for six years and had been living with her daughter, my mother. The newspaper which had sent her to sleep was probably The Nottingham Evening Post, now called simply The Post. A glance at its website today shows what the main headlines of the newspaper will be: 'A Royal Welcome for Prince Harry, as he visits Nottingham today'. 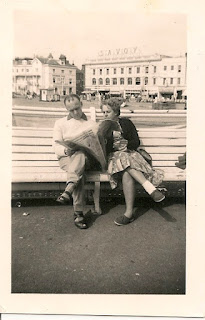 Delivery of The Post is eagerly awaited by my own mother each day. She reads it from 'cover to cover', although I think she skips the sports pages, which my father would always turn to first for news of his football team, Nottingham Forest. When she has gleaned as much as she can about local news she completes the crossword. Only then can she pick up her knitting guilt-free. 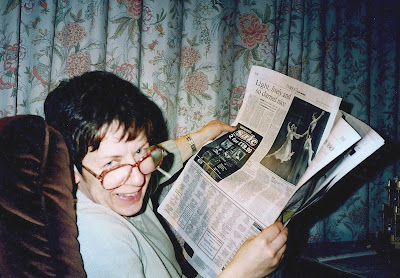 In this picture she was snapped by me reading Dad's newspaper over his shoulder. This was 1966 Southsea, and Mum was probably wishing Dad would hurry up and let her get to the crossword!

At Christmas 1999 I was snapped reading the The Times newspaper, which was still issued as a broadsheet at that time and after 200 years was published as a tabloid in October 2004, saving much arm-aching. Don't be fooled by the content of the Arts' page which was reviewing some ballet performance as 'Light, lively and so darned nice'; I'm not a ballet lover. I was probably scanning the opposite page, which would have been music, books or drama. Look at the size of my off-the-shelf reading glasses, which I'd started needing in order to read small print. These days I just 'pinch and zoom' or increase the font size on my iPad. 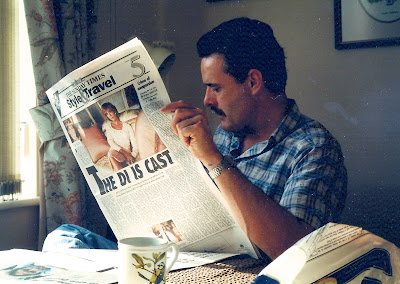 In 1992 my husband was also suffering arm-ache problem with the Style and Travel section of The Sunday Times, which proved much easier to read with an arm resting on the breakfast table. The headline, 'The Di is Cast' clearly refers to Diana, Princess of Wales, whose picture can be seen top left of the front page. It seems to refer to Catherine Oxenberg, who played Diana in a 1982 TV movie. I wonder why it was headline news ten years later. The words 'confusion rages' can just be made out - it certainly does! 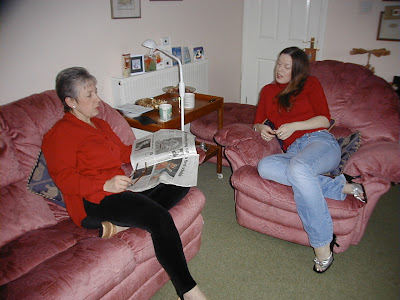 By Christmas 2001 I was scanning the paper without the benefit of reading glasses, so I must have opted for contact lenses that day. My parents were visiting so perhaps it was The Sunday Express (My mother still loves the General Knowledge crossword). The headlines were complaining about old favourites 'propping up a tired schedule' so I'm guessing these were the TV and entertainments pages. 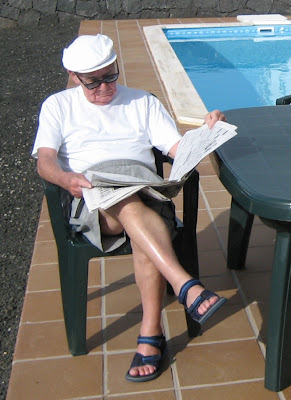 And here is my late father, enjoying Christmas in the sun in 2005 and reading one of the few English newspapers available in Lanzarote. I'd better not say the title but some of you will guess when I say refer back to that description of Tit-Bits at the top of this post. Aimed mainly at a female readership, add gossip-mongering and rabble-rousing to the list and you'll know which one I mean. Well there wasn't much choice, and it does have a sports section and a crossword! 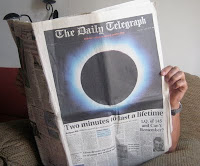 If you want to know more about the news behind the headlines in the last picture you may like to re-visit a previous post where a solar eclipse is featured.

I've still got that newspaper and my husband posed with it especially for the blogpost. Note that both arms are resting on a soft cushioned armchair to prevent the well-known affliction 'broadsheet-armache'.

To see what other poses newspaper readers adopt, why not go over to this week's Sepia Saturday newsstand and take your pick of newspapers, magazines and periodicals. There's bound to be something to suit everyone.