Lincoln and the Lounge Lizards

The title of my post isn't the name of a new pop group; it's about coffee! The Sepia Saturday prompt this week features the corner doorway of the Lincoln Coffee Lounge in Sydney, Australia, a haunt for artists and writers. I've pretty much covered the coffee theme in 'Let's Have Another Cup O' Coffee', but the English city of Lincoln was one of my own haunts back in the early seventies. I was at teacher training college there for four years and I lived and taught near the city for a further four years until 1978. As a student most of my coffee was consumed back at college and we were more familiar with local pubs than cafés. However, when my parents came to visit we would go to the High Bridge, overlooking the busy main street, or find one of the other quaint cafés or restaurants nestling amidst the ancient houses and shops of this historic city. 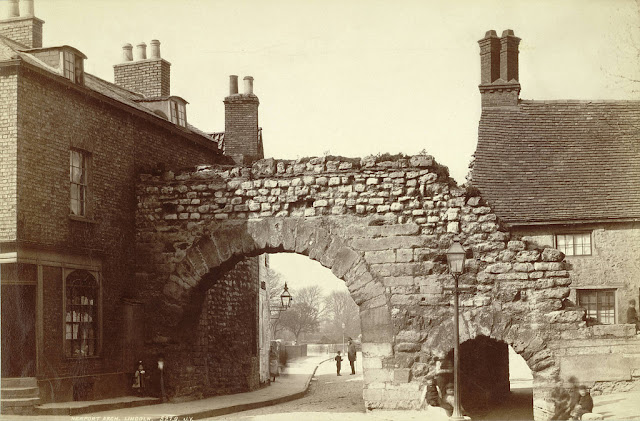 The picture above is of Newport Arch, Lincoln, probably at the turn of the last century. There is a corner doorway, but it's not a café or restaurant. The arch was the north gate of the Roman city Lindum Colonia. It was remodelled in the medieval period and has suffered damage from vehicles in modern times. Last year it was added to the English Heritage 'At Risk' register and has become a danger to the public as they pass through the arch. I have passed through on countless occasions, and probably became a little blasé about its significance. However, take a moment to consider the archway; fascinating as it is for us to peer at the sepia figures in the picture above, and carry out our usual musings about their lives, how much more thrilling is it to imagine Roman vehicles and people passing through on entry to the city? I hope a solution can be found as it remains the only arched Roman gate in the UK still used by traffic. 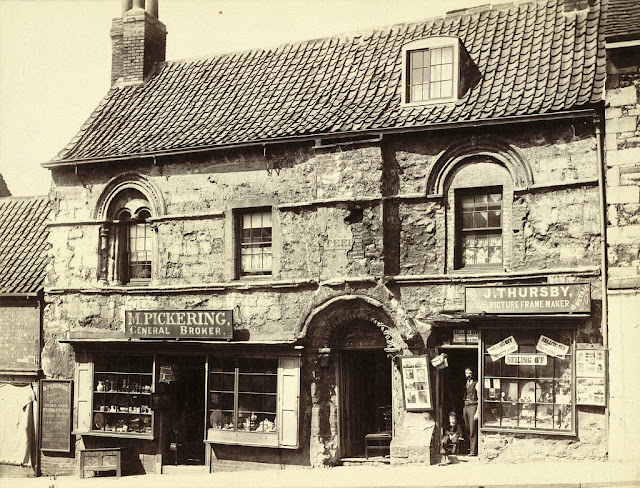 The building above stands on Lincoln's Strait Street and is known as The Jew's House. This dates from the twelfth century, and is one of the earliest town houses still in existence in England. It stands on Steep Hill (and yes, it is) and was associated with the thriving Jewish community of the medieval period in the city. Since then, it has had many lives and today, where M. Pickering once plied his trade, there is a restaurant. Click here to see how it looks now.  I expect they serve a decent cup of coffee. and I wouldn't be at all surprised if artists and writers frequent the place. There are certainly many students in Lincoln; in my day it was the teacher training college (Bishop Grosseteste) but today there is also a modern university. *Both images courtesy of Cornell University's Flickr photostream

Back in the 1930's there was a group  of like-minded young bohemians, including the poets, Vernon Watkins and Dylan Thomas who would meet in a café in Swansea to put the world to rights, in a similar way to those in the prompt picture. They were known as the Kardomah Gang. Kardomahs were a chain of cafés long before Starbucks arrived, and they had branches in most of the major towns in UK. When I was fifteen I was a 'Saturday girl' in the Nottingham branch on King Street. I didn't serve in the café itself but I worked at the counter upstairs where the coffee beans were weighed and sold. We also ground and bagged the coffee for individual customer's requirements. It was hard work as I was on my feet all day and I was paid very little, but I did enjoy meeting people. I would inevitably get the comment that it was lovely to work with the smell of freshly ground coffee all day; it wasn't. That part soon lost its novelty as I would go home with the fine dust of ground coffee in my hair, ears and nostrils! As far as I know that particular branch wasn't a meeting place for the poets either!

The Kardomah Gang are remembered in a radio play 'Return Journey' which has Thomas, on a winter's day, visiting Swansea after the war, when the Kardomah has been 'razed to the snow'. He is in search of his younger self and engages with various people to see if they have any memory of him. A passer-by says he hasn't seen him since the old Kardomah days when they would be drinking coffee-dashes and arguing the toss. Thomas asks him what they were arguing about:

Music and poetry and paintings and politics. Einstein and Epstein, Stravinsky and Greta Garbo, death and religion, Picasso and girls..........

How Dan Jones was going to compose the most prodigious symphony, Fred Jones paint the most miraculously meticulous picture, Charlie Fisher catch the poshest trout, Vernon Watkins and young Thomas write the most boiling poems, how they would ring the bells of London and paint it like a tart....

Oh the hissing of the butt ends in the drains of the coffee dashes, and the tinkle and the gibble-gabble of the morning young lounge lizards as they talked about Augustus John, Emil Jannings, Carnera, Dracula, Amy Johnson, trial marriage, pocket money, the Welsh sea, the London stars, King Kong, anarchy, darts, T.S. Eliot and girls.........

I wonder what the 'young lounge lizards' in the prompt picture discussed, and if it was half as interesting or as poetically remembered.

Join our own Café Society over at Sepia Saturday, where the subjects are bound to be as varied as the above, depending on how others have interpreted the prompt. If you are a true lover of all things sepia we also have a lively Facebook page.
Posted by Little Nell at 09:28