If The Cap Fits

Two pictures taken  approximately thirty years apart and yet very similar. Who are they? The first is my mother with her brother Billy, taken in about 1924. 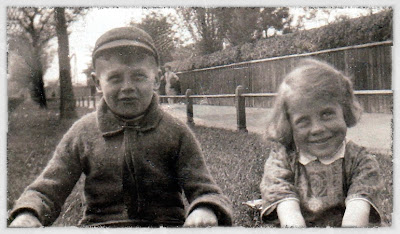 The second is me with my brother, in the grounds of Wollaton Hall, Nottinghamshire in about 1954. 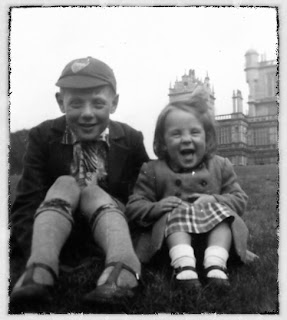 Apart from the siblings as subject matter, the other similarities are the poses, seated on the grass of a park, and the two boys' caps. Mum and her brother were close to each other in age, with just seventeen months between them. They were also close childhood companions and Mum was devastated when he died in a freak accident aged fifteen. You can see them together again in this post, where they are a little older.

I'm not sure where Mum and Billy are sitting but it could be the Victoria Embankment at Trent Bridge, Nottingham where they lived. There was a park with a walkway by the river where families could spend a pleasant Sunday afternoon. Billy is wearing a smart little cap, but it's not part of a uniform as he was not a member of the Cubs. My brother's cap is probably part of his school uniform, which was deemed the thing to wear on a Sunday outing to Wollaton Hall, a stately home which housed a natural history museum. When I was a child it contained glass cases full of very frightening stuffed animals. 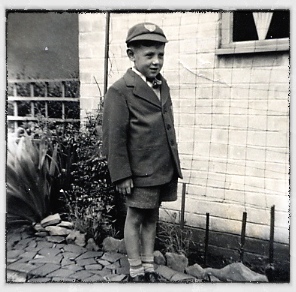 Here's my brother when he was a little younger, proudly wearing his new school uniform complete with cap. Note that the blazer had plenty of room for growth! 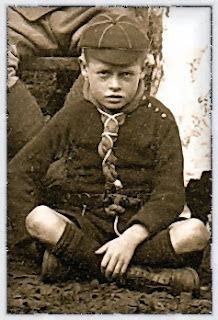 If we step back two generations we find another little boy in a cap. This one is part of a cub's uniform and the wearer is my great uncle Charlie aged eight, at his big sister's wedding. It was my grandparents' wedding, which some of you will remember from Wedding Day Delay, where everyone had to get dressed up again the next day to pose for photos. This could account for the grumpy demeanour.

This splendid photo of the Irish Revolutionary leader, Michael Collins, showing him talking to the Kilkenny Hurling team at Croke Park in Dublin in 1921, was Sepia Saturday's photo prompt this week. It has lots of men wearing caps, many of them with a peak. So, of all the possible themes suggested, I plumped for that one. Why not visit and 'doff your cap' at the many and varied interpretations of the prompt from the creative Sepia Saturday contributors.