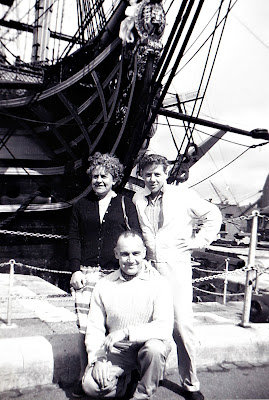 Here are my Mum, Dad and brother in 1960, standing in front of 'HMS Victory' the famous flagship of Admiral Lord Horatio Nelson at the Battle of Trafalgar (1805). I took the picture I believe, so it wasn't bad for an eight-year old. One of the possible themes from this week's Sepia Saturday photo prompt, is big ships. HMS Victory qualifies on two counts; her size and her reputation.


I don't remember much about the 1960 visit, but I have been a few times since to the Naval Dockyards, Portsmouth, where not onlyVictory, but also Warrior (1860), are berthed. HMS Warrior was the Royal Navy's first armour-plated, iron-clad warship and has been beautifully restored. When completed in October 1861, she was the largest, fastest, most heavily-armoured warship the world had ever seen, but she was never to see battle in her time in service. She had rather a chequered career over the years and had several name changes, narrowly avoiding the fate of her sister iron-clads who were sold as scrap metal. She is now the fully-restored museum ship we can see today in Portsmouth.

The dockyards are well worth a visit, though perhaps this should be spread over two days as there is so much to see. Henry VIII's warship is also on view there. The Mary Rose was sunk accidentally during an engagement with the French invasion fleet, on 19th July 1545. The wreck was raised in 1982 and yielded up artefacts and human remains which have helped to inform our knowledge of the life of the Tudor sailor. Perhaps most telling is that of the bones of 179 individuals recovered, all male, many were between the ages of 11 and 13 years and the majority below the age of 30. The ship was stocked 'like a miniature society at sea' and many of the objects related to indiviual crew members; clothing, games, various items for spiritual and recreational use and those relating to mundane everydays tasks, such as personal hygiene, fishing and sewing.

I remember being fascinated by the conditions on board Victory on each of my visits. I was surprised at how cramped the living quarters for the sailors were, but we really do get a good impression of their lives 200 years ago. Nelson's quarters are all beautifully preserved, including his dining table, where he would have dined with his brother officers. His 'cot' looks exactly like that of an infant, which would make sense if he wanted to sleep when the seas were at their most turbulent. There are many stories woven around Nelson, his flagship and the Battle of Trafalgar. The one which most people remember is that he hoisted the flags which displayed the signal 'England expects that every man will do his duty' immediately prior to the battle on October 21st 1805. He lost his life on the deck of The Victory, when shot by a French sniper later that morning. A commemorative plaque now marks the spot on deck.


In 1989 we took our son and daughter to visit these famous English ships at the Naval Dockyards. Here they are seated in front of a ship's figurehead. 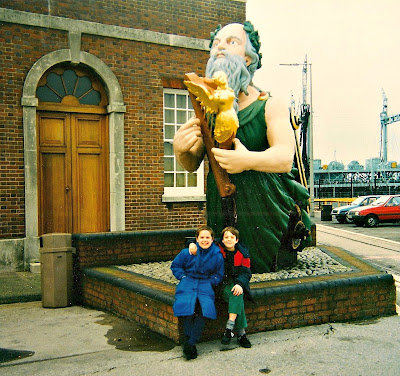 This is from  HMS Hibernia and represents the Celtic God, Dagda with his lyre. The figurehead no longer stands in Portsmouth, but was restored, just five years after the above picture was taken, and returned to Malta, from where it had been removed. The ship had been a permanent fixture in the Grand Harbour in Malta, until the middle of the last century. Hibernia was a first rate ship of the line' when launched in 1804, with a full complement of 850, including the Admiral. She served in the Napoleonic Wars and remained in the Mediterranean for a time as a flagship, but then sailed for Malta as a receiving ship, the Naval equivalent of a barracks. She was broken up in 1902 and the figurehead sent to Portsmouth. A book has recently been published chronicling Hibernia's story and this was reviewed in 'The Times of Malta' a couple of weeks ago. Click here to see some real sepia pictures of Dagda.


To bring my Victory Parade full circle, The (London) Times newspaper carried a story this very week about the Victory. The ship is currently undergoing a £50, million facelift which includes the removal of modern sealant from its decks and its replacement by hemp reclaimed from old ropes. The material, known as oakem, is then made waterproof with pitch. Conservators are using the same materials and implements which were used originally prior to the battle of Trafalgar. Then the crew did the job in a month, the latest restoration is expected to take at least 20 years.

If you can't wait that long, why not lift anchor and go and see what other Sepia Saturday contributors made of the prompt.