The Boy With a Bat 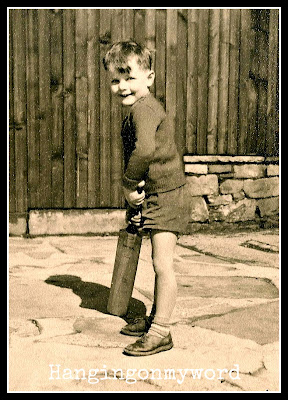 The boy with a bat in the first picture is my husband aged 5 years in 1954. It was actually one of a series of photos taken on his birthday. He points out that, although he is left-handed, this is a right-handed stance. His father taught him to hold the bat, never thinking about the fact that his son was left-handed; the consequence was that he continued to play right-handedly, both cricket, and later, golf. 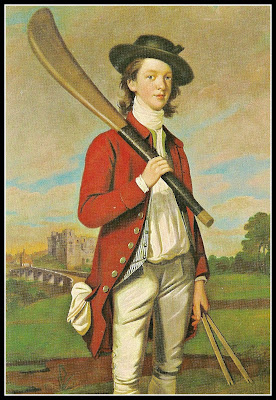 ‘The Boy With a Bat’ is actually the title of a painting in the west Dining Room of Breamore House near Salisbury, Wiltshire. It was painted by Thomas Hudson (1701-1779), and is the subject of a postcard I have.The painting was exhibited in Washington for The Treasure Houses of Britain Exhibition in 1985.

"The background shows the old castle church, houses and bridge at Newark. With a curved bat over his right shoulder and two stumps in his left hand the sitter is Walter Hawkesworth Fawkes of Farnley in Yorkshire. Painted in the middle of the eighteenth century when cricket was still a new game, this painting and another belonging to the M.C.C. are considered to be the earliest paintings of cricketers.” (Breamore House website). 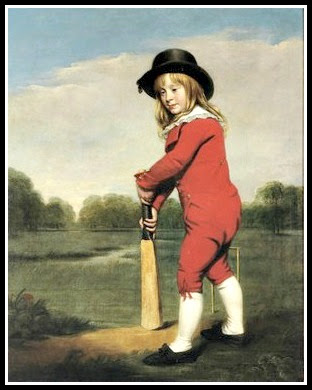 Another boy with a cricket bat is John Opie’s (1761-1807) ‘The Red Boy’, which came under the hammer at Christie’s in 2007. It was exhibited at the Royal Academy in 1794 as ‘Portrait of a boy’, and again in their 1876 exhibition ‘Works of Old Masters’ as “The Red Boy’. The subject was Joseph McDonough and the notes prepared by Viv Hendra for Christie’s, give a useful background to popularity of cricket at the time when Opie painted the portrait.

Notes: This magnificent picture is both an example of Opie's precocious talent for child portraiture and a key cricketing image. Dating to 1793, it was painted at the height of Opie's artistic career, and shows him at his most confident and accomplished.

The nature of cricket changed hugely from its origins in the 13th Century. By the mid-18th Century, it was increasing in popularity and steadily evolving into the national sport that it is today. Matches were often played for high stakes and clubs such as The London Club, formed circa 1701, were evolving to organise and regulate the game. The earliest surviving bats resemble a broad, curved hockey stick. These were replaced by the straight blade, as appears here, in circa 1750, with the advent of bowlers pitching the ball up. On the basis of early depictions of the sport, it appears that the game did not originally require a 'wicket', and when one did appear the early type consisted of only two stumps, approximately twelve inches high, with a third cross-stump, or bail. A third vertical stump was first introduced in 1775, to make the bowler's job less arduous. The two-stump wicket had been completely phased out by the early 19th century. The present picture is therefore a comparatively late example of it still in use. 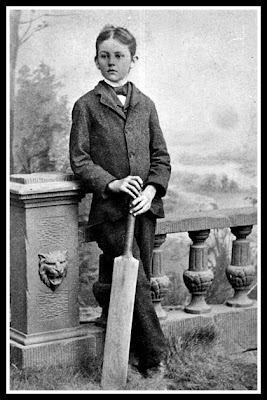 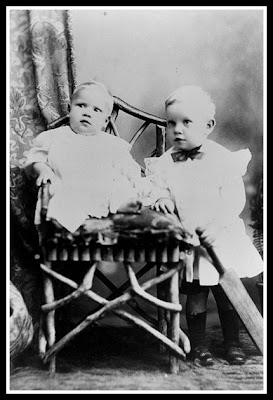 The State Library of Queensland via Wikimedia commons, provides another boy with a bat: ‘Master Edward Staunton posing with a cricket bat’. An even younger boy with his sibling comes from the same source.


For more ‘Boys with Bats’ take your seats at Sepia Saturday where two rival sports; cricket and baseball are vying for attention in the picture prompt this week. Why not go and cheer them on?

A Breathless Hush, is my second cricket-themed post, where you can read about a special match with HRH Prince Charles, at which I was a spectator.