Something For The Boys

Our Sepia Saturday photo prompt this week is a group of scouts. It’s a hundred years since the scouts and guides movement began so this was a fitting choice. At that time my grandfather and his brother were committed members of the Boys Life Brigade, a Christian youth organisation which formed after the original Boys Brigade

The latter had begun in 1883 and Baden Powell, who was the Vice-President, used its influence to promote the idea of scouting and outdoor pursuits. The Boys Life Brigade was a similar movement to Boys Brigade, but the organisation objected to the dummy rifle drills and indeed any representation of weapons. The section for 8-12 year olds was known as the Life Boys for many years before being restyled as the Junior section. The Wolf Cubs of the Boy Scouts catered for younger members and so demand had also grown within the Boys Life Brigade.


I wrote about Granddad and his brother in a previous post, 'Drum Roll Please’. in which my own father also featured due to the drum connection, but I didn’t post a picture of Dad in his Life Boys uniform. So, to make amends, here it is. A simple rosette was worn as an identifying emblem in the early days and this later extended to a belt, haversack and pillbox cap worn over the boy’s everyday clothing.

I asked Dad what he remembered of his Life Boy days  and he told me that there were always plenty of opportunities to take part in competitive sports and gym circuits. This would have suited him down to the ground as he always excelled in these subjects. He also remembers playing the kettle drum, which began his lifelong love of the instrument, which he went on to play in RAF bands. Another memory Dad has of his membership, is that on Friday evenings they were allowed to attend the local baths where for one old penny they could have a proper bath. Mum also recalls that this was a great privilege as at that time families would use a tin bath. It must have been a luxury to have a cubicle of your own and running water. Mum remembers paying three pence, so it seems there was some sort of discount for the Life Boys members.

Mum was in the Girl Guides but was never a brownie. She attended St.Saviour’s Sunday School in Nottingham, where her aunt was a teacher and I suppose there was only so much free time that youngsters had in those days. She remembers going on outings and picnics with the Sunday School, but when she eventually joined the 3rd Nottingham Castlegate Girl Guides Company, she threw herself into all the activities on offer. Mum has always been a joiner-in, and still is at the age of 91. Some readers of this blog may remember her from her Red Cross and Dramatic Society activities whilst a teenager. She went on to become Patrol Leader, but for some reason, my grandparents wouldn’t give permission for Mum to attend camp. I’m sure she’d have made the most of it. There are no pictures of Mum in Guides uniform but she does still have her badges. 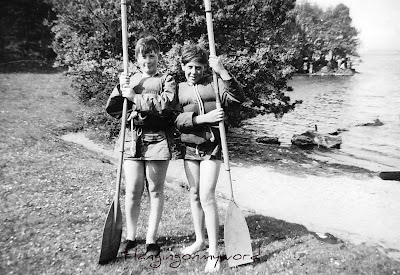 My older brother was a Boy scout in the fifties when we lived in Kendal in the Lake District. I have a hazy memory of visiting him when he went to camp at Tarn Hows. And here he is with his friend about to go canoeing - I’m assuming this as they aren’t wet yet! 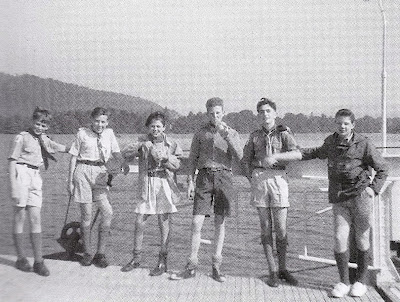 My brother also kindly sent me this scan which is the  only picture of him in his uniform which we can lay our hands on at the moment, but it’s how I remember seeing him when I was a little girl and he was my big brother. He is eight years older than me so I wasn’t really a suitable playmate for him but I remember him patiently teaching me boyscout campfire songs .

Ah, they really don’t write them like that any more!

For more campfire curiosities trek over to Sepia Saturday where our Scoutmaster Alan will introduce you to some more jolly boys and girls.