In the early seventies, when I was at college in Lincoln, we students would enjoy nights out at the local pubs and discos. The highlights however, were the Balls. These days I believe they’re all called ‘proms’! Any excuse for a ball seemed to be the motto: Rag Week, May Queen, Summer and Christmas. Here is a selection of some of my tickets from that time. 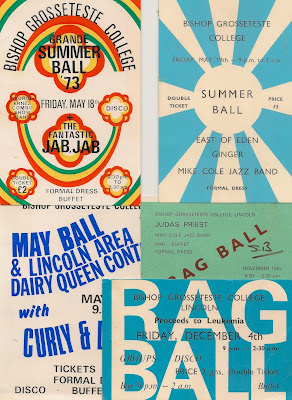 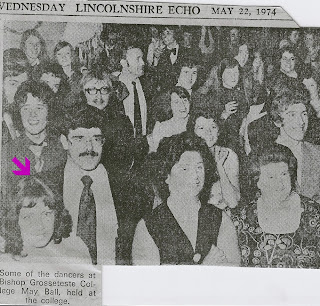 The names of the bands don’t mean much nowadays, although I do remember Judas Priest and East of Eden being quite famous. Formal dress meant long skirts for the ladies and suits and ties for the gentlemen. Two pounds was a lot of money for a student and we probably had to save up for quite while. The local paper snapped me (pink arrow) with my fiancé, on the front row, watching ‘Curly and Lucky (whoever they were). It would seem that the event was open to anybody and I’ve no idea who the two charming ladies on the right were - perhaps they were groupies! 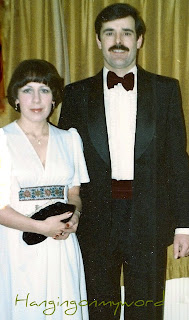 In 1975 we got married, and as my husband was in the Royal Air Force, we attended much more formal balls and dinners. the first picture shows us at home before going to a Summer Ball at RAF Waddington, where we had been involved in decorating one of the many halls and marquees. Our theme was a Mississippi Steamboat, complete with life-size figures. Here I am refuelling at the bar (pink arrow). 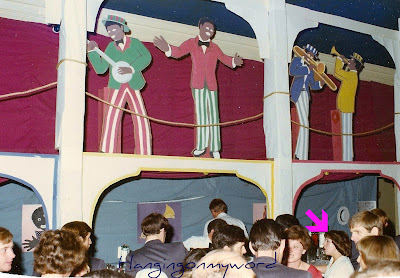 The RAF Balls were always sumptuous affairs with good music, food and drink - our Mess Bill suffered for many months afterwards! Breakfast was usually served from about 5.00 a.m and thereafter we began the business of clearing up and taking down the decorations. What had taken months of preparation was all pulled apart in a few short hours, as the Officers Mess was retuned to normality. 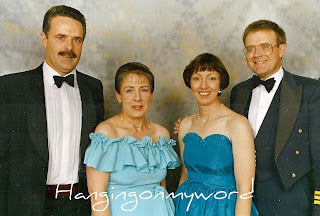 When my husband had left the RAF we were lucky enough to be invited by friends who were still serving, to their own functions. Here we are in the nineties attending an RAF Summer Ball. It was a great excuse to dress up again; on that occasion I remember having to tuck my gown into the dodgem cars we rode in the grounds!

Here’s a flavour of the more formal menu at a ‘Ladies Guest Night'. This was when wives and girlfiends were invited to attend the usually all-male ‘Dining In’, which was a very formal ‘do’ with speeches and military bands. The only times when I would be addressed as Ma’am - I loved it! 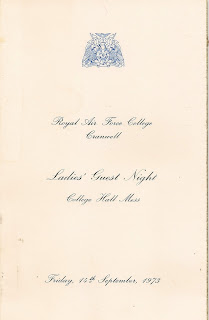 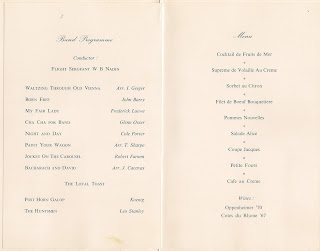 Of course it wasn’t all formal; here we are dressed-down for a Hallowe’en Party. Great to let my hair down and behave outrageously! 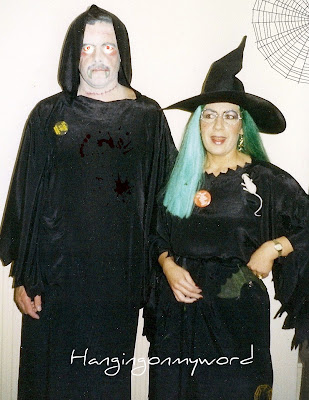 For more outgoing personalities and persons going out, you are cordially invited to attend this week’sSepia Saturday, dress: casual, tickets:free.