Top of the Hat Parade 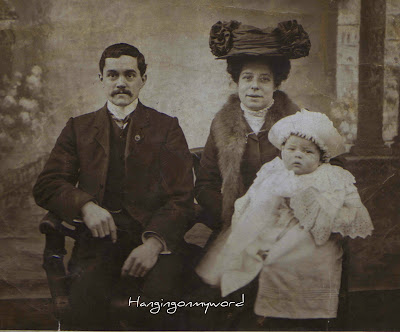 Sepia Saturday this week has a hat-theme and so I chose this one from my husband’s family album. It’s my father-in-law, with his parents in 1908. He was actually born 104 years ago this week, near enough to the Festive Season, to be given the name Noel, so it’s a good way to remember him too. He appears as a young man in an earlier post. I’ve always been drawn to this studio photograph because of the size of Grandma Alice’s hat. I wonder what colour it was. It’s quite a confection, balanced so beautifully atop the hairstyle of the day, and with those large scrunches of material gathered into a ball and placed either side of the head. She’s very on-trend with her fur ‘tippet’. Today’s Times Newspaper carries a fashion item titled; ‘What’s Hot? Look No Fur-ther’ and showcases several young women wearing fur coats, collars and tippets. My father-in-law is also in his best outfit, including a baby bonnet that looks a litle stiff and uncomfortable. 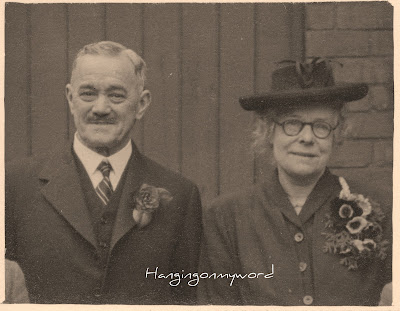 Here are the grandparents again, some years later, probably at a wedding. The hat has reduced in size, but the corsage of anemones makes up for it.This time the hat is worn at a jaunty angle, and doesn’t need so much hair to support it. It may be unkind to say so, but I don’t think the glasses did an awful lot for Granny and make her appear a lot older than she probably was. What a pity contact lenses hadn’t been invented then.

Big hats were obviously de rigueur for ladies in 1908. This painting by Gustav Klimt* of A Lady With a Hat is from about the same time as the first photograph above. This redheaded beauty also needed ‘big hair’ to prop up her millinery. It looks as if she has the fur wrap too, so Granny was obviously very fashionable. 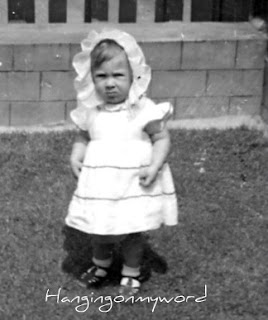 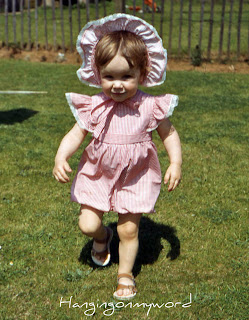 Big hats are vital of course, if we want to protect ourselves from the sun. Some of you will recognise your blogger (if a little grumpy-looking) in this photo,  and, about thirty years later, my own daughter in her sunbonnet, made by me to match her playsuit. Like mother, like daughter! 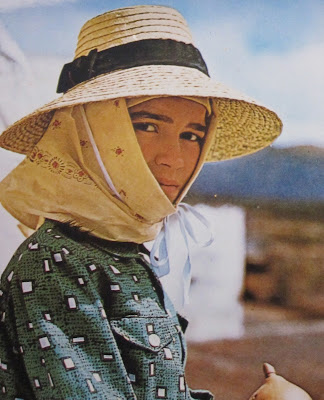 Here on Lanzarote, the locals know about protecting themselves from the sun, and the charming picture on the left is from our wonderful agricultural museum, showing traditional head dress for females. Workers in the fields can still be seen wearing these distinctive Canarian hats, and of course there are several variations in the traditional costumes which are worn at fiestas. Most locals, and many of us residents, cover up well in the sun, but we do see some badly exposed bodies amongst holidaymakers, and believe me a hat is the least of their worries!

The wonderful picture on the right of an ‘Old Woman in a Sunbonnet’ by Doris Ulmann (1884-1934)*, shows that despite the fact that the subject took the best precaution she could to protect herself from the ravages of a fierce sun, in a life which was probably spent working outdoors in all weathers, her body has still suffered badly. She’s probably not as old as she looks and this picture should serve as a warning to all sun worshippers.

If you’ve enjoyed this post, why not throw your own hat into the ring. Join us at Sepia Saturday to see what others have come up with -  or create your own; it can’t be worse than some of the specimens at last year’s Royal Wedding.
*Public domain, via Wikimedia Commons