Sifting Through the Memories

My Sister-in-Law, like me, is now a grandma, but when she was a little girl herself she was one of the famous Be-Ro girls. Her picture adorned the front of the ‘Home Recipes’ booklet, striking the same familar pose as the original, and each successive, model, pointing at a copy of the booklet whilst surrounded by baking paraphernalia. She wore a blue shirt and a red and white check bib-pinafore, and sported the sensible schoolgirl haircut of a wavy bob. She had that look of fresh-faced innocence that Be-Ro obviously felt was necessary to promote their flour. Later, a line-drawing of the photo was printed on the side of the flour bags themselves. Her aunt also worked for the company and she herself had appeared in a ‘family group’ picture on one of the previous editions of the book. She suggested her niece as the new model and the rest is (family) history. As far as I know there was no financial remuneration and the reward was the kudos of having her face on the Be-Ro bags and recipe booklets. 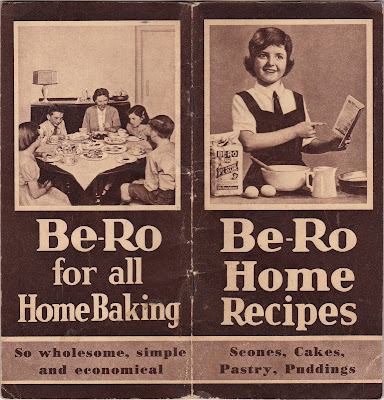 I wondered if this early exposure to the world of baking influenced her choice of career, as she went to Nottingham’s Clarendon College to study Catering, and had jobs closely connected with food all her life. She retired a couple of years ago from the City Hospital, where she worked as a Nutritionist. Whenever a celebration called for a cake, my clever Sister-in-Law was the one who created it. She made my wedding cake and more recently, both my parents’ 90th birthday cakes.

The booklet is now in its 41st edition, but is no longer free as it was in the early days. My Sister-in-Law still treasures her copy. It’s a much loved little book full of useful basic recipes and there are many internet stories of dog-eared copies which still hold a special place on the cookery book shelves. In 2008 The Independent newspaper featured it in its list of the 50 Best Cookbooks, and it’s not difficult to see why.

When she was a young woman the local paper reported her story, with a cleverly punning headline which I would have loved to have used for this post. My Sister-in-Law tells the story of how one admirer, and collector of recipe books, sent a copy of the booklet for her to autograph; fame indeed! 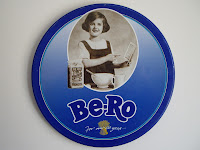 A centenary biscuit tin was produced, sadly not with my Sister-in-Law on the lid, but the smiling face of a previous model. I expect these are now collectors’ items too.

Clicking on the Be-Ro link above will take you to company’s homepage where there is a fascinating potted history of how Thomas Bell founded his flour company ‘Bell’s Royal’ but had to change the name after the death of Edward VII, and so a conflation of the two words became Be-Ro. The booklet was originally given away free to promote not just the flour but to assist families working to a low budget and trying to provide good home baking. If you want to try out some of the recipes yourselves, from Almond Biscuits to Yorkshire Puddings, click here.

If you’d like to see what other contributors are cooking up, have a look at Sepia Saturday, there are bound to be some interesting takes on this week's prompt.