In Her Sunday Best

In her Sunday Best, cradling her doll for comfort,
Her eyes wide and uncertain,
Not confident enough to smile,
Standing as straight as chubby two year-old legs
and starched petticoats will allow,
She poses for her place in The Album of Immortality 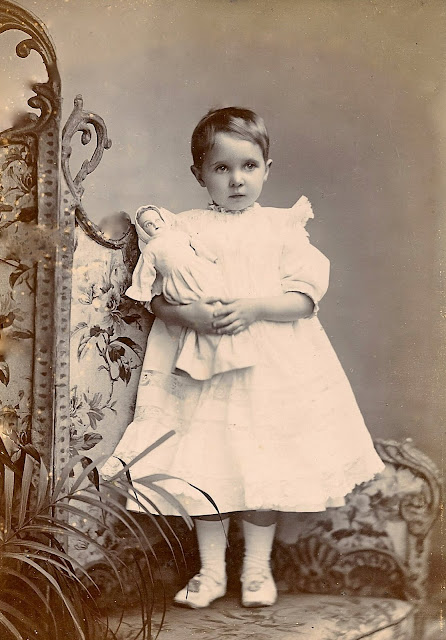 I was delighted when Alan’s Sepia Saturday prompt this week was a photograph of an angelic little girl. I have quite a few cherubic little girls in my family albums, but I think they will keep for another day. So, instead of producing what could have been a portfolio of potential models of yesteryear, I went for the ‘less is more' option and stepped outside the family to another little girl, clutching her favourite doll. She has one of the sweetest and most angelic faces I’ve seen in sepia. I inherited the picture when she died and have always loved it.


You may remember an earlier post I did about her father, ‘A Fine Looking Gentleman’, who bought Mary up after her mother’s early death. I mentioned this picture then, as I think it was taken on the same day as her father’s; the furniture is the clue, and if you check back to the picture of her father I’m sure you’ll agree. 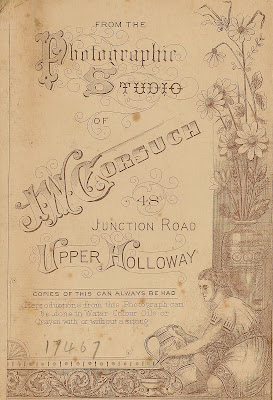 I don’t have lots of information about Miss Mary Carter, as she died an elderly spinster with no living family that I knew of, so it’s good to be able to honour her memory in this way. The back of the photograph shows that the studio was in London, so perhaps she lived there with her family for a while. Each photograph, and the one which I think must have been her mother, bear the marks of a triple folded photograph frame with an arched top, so I am taking that as a further clue. I think she came from a loving family, as there is a further ‘snap’ of a family group with what appears to be grandparents, aunts and three children, but which is Mary is difficult to tell. Is she the shy little girl on the left, the long-haired girl on the right, or the baby, sitting on the rather stern looking grandma’s lap and reaching out for her older sister? I don’t even know if she had any sisters. The gentleman on the right could well be Mr Carter; he certainly has the neatly-trimmed beard. I also inherited a very old copy of ‘Grimm’s Fairy Tales’ inscribed, "To Pops’ Mary Carter on her 8th Birthday”. I like to think ‘Pops’ was her grandfather, and that he is the patriarch on the left in the photograph. 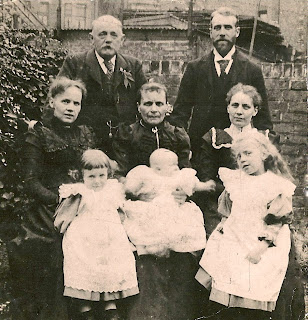 Miss Mary Carter was the companion of my mother’s maiden aunt, and always dressed as elegantly as in the studio portrait below. I had maiden great-aunts from that generation on both sides of the family; so many young eligible men died in the First Word War, so it was quite common when I was growing up. By the time I knew Miss Carter she would be in her fifties. The photograph of her with her cat, Peter, was taken in her garden in 1954. 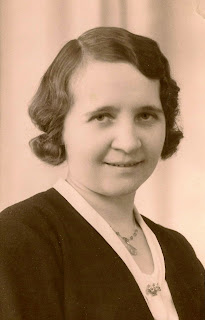 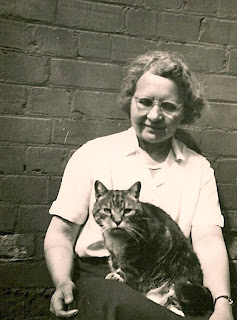 I think my Dad took the picture, as there were several taken on the same day with Miss Carter and her friend, my own great-aunt Maude. Among that batch was this one of another little poppet with her dolly; me, aged two, closing the circle for this week. 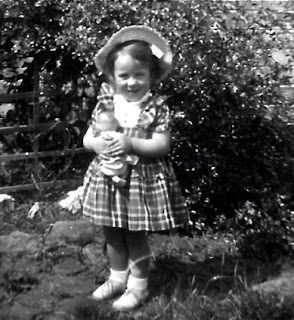