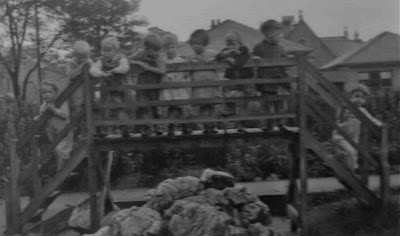 I always try hard to stay on one of the themes suggested by Alan’s photo prompt in Sepia Saturday. Having spent a couple of pleasant, but seemingly fruitless, hours trawling my family albums, I came up with the one above, almost in desperation. Alan’s picture had President Wilson descending the staircase of the observation platform of a train. The above picture shows a little man, on the right, aged about three years, coming down the stairs of a wooden bridge. This is from my husband’ s family album and is one of a series of shots of him taken at Willow Lane Nursery, Lancaster, probably in 1952. I think it must have been a pretty progressive kindergarten, judging by the other shots, with lots of opportunities for learning through play. It’s the least clear of the set, but it does fit the theme - which I am determined to follow. 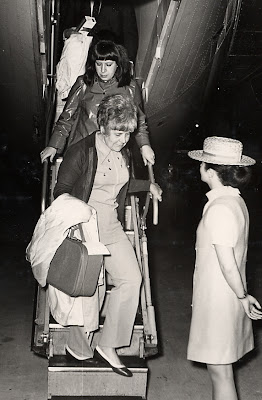 This one should raise a chuckle. The man in the photograph (my father) has been decapitated, but is still grimly hanging on to his duty-free cigarettes. That’s my Mum, just about to step onto terra firma, sporting a trendy trouser suit and newly set hair, and clutching her coat and vanity case. Sandwiched between them is a 18 year-old Me, in my red PVC mac and backcombed hair. It looks as though I’d plastered on the mascara as well. I was obviously out to attract as many Spanish waiters as possible - for this was Ibiza in the Balearic Islands, and it would be my first taste of Spanish sun. This was 1970, long before Ibiza became the ‘Party Capital of the World’ and was still a largely unspoilt and beautiful island.

The next sequence, which immediately came to mind when I was scratching the inside of my brain, is the iconic, ‘Man ascending stairs’ by Eadweard Muybridge in 1884-5. He was a hugely influential pioneer photographer and had a fascinating life, which included the murder of his wife’s lover. You can be diverted for a few moments by clicking here. It’s well worth the read.

It won’t have escaped your notice that this man is neither descending the stairs (as in the original prompt), nor wearing any clothes. By the look of his well-toned muscular physique he was probaby a body-builder/artists’ model. Muybridge did produce similar moving images of a female actually descending stairs, but I am far too coy to reproduce in my blog; voyeurs may click here.

So, for a man descending a staircase, but also naked as the day he was born, what better illustration than Marcel Duchamp’s ‘Nude Descending Staircase No 2’, which Duchamp acknowledged was influenced by the work of Muybridge among others. 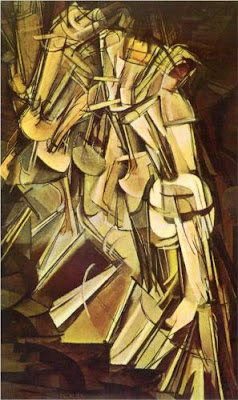 And to bring this post back full circle to the original prompt, there is also a Presidential connection. After seeing the above work in an exhibition, President Roosevelt wrote:

"Take the picture which for some reason is called 'A Naked Man Going Down Stairs'. There is in my bathroom a really good Navajo rug which, on any proper interpretation of the Cubist theory, is a far more satisfactory and decorative picture. Now, if, for some inscrutable reason, it suited somebody to call this rug a picture of, say, 'A Well-Dressed Man Going Up a Ladder', the name would fit the facts just about as well as in the case of the Cubist picture of the 'Naked Man Going Down Stairs'. From the standpoint of terminology each name would have whatever merit inheres in a rather cheap straining after effect; and from the standpoint of decorative value, of sincerity, and of artistic merit, the Navajo rug is infinitely ahead of the picture.” (History as Literature by Theodore Roosevelt 1913)

So there you have it, Men (of all ages, shapes and sizes) descending and ascending stairs, either clothed or naked, some complete, others, with body parts missing.

My three year-old grandaughter, who is visiting, wandered into the room whilst I was writing this post and I asked her what she thought the picture above was. She looked nonplussed, so I asked her if it looked like someone coming downstairs. She wasn’t so sure. “Like Bananas, in pyjamas!” I prompted helpfully. Suddenly recognition dawned. Now it all made perfect sense!