Not Rhett and Scarlett 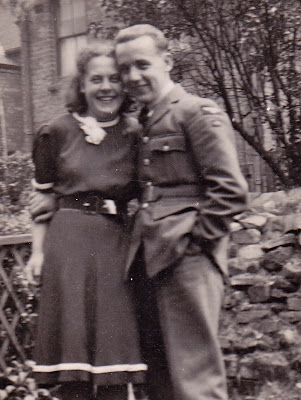 For those of you who enjoy a bit of romance, you are in for a treat over at Sepia Saturday this week, where Alan’s picture entitled ‘Romance’ is the prompt. Settle back and enjoy my contribution, a romantic real-life story. Here are my Mum and Dad aged twenty, pictured in front of the Anderson Shelter in my grandparents’ garden in Nottingham. They got engaged on November 22nd 1941, three days before my Mum’s 21st birthday, having known each other since Dad was seventeen. Mum remembers it was a Saturday and that there was bread and margarine and celery on the table for the celebratory meal. Dad had joined the R.A.F. and the following year Mum was called up into the A.T.S. From then on life would never be the same again. They were both serving when they married in July 1942, two days after Dad’s 21st birthday. It was always a sore point that Dad had to have his parents' permission to get married as he was still not 21 when the banns were called, but oddly enough no-one asked his parents if he was allowed to fight for King and Country! Dad married in his uniform and Mum would probably have done the same if one of her friends hadn’t generously donated her clothing coupons so that she could have a real wedding dress. 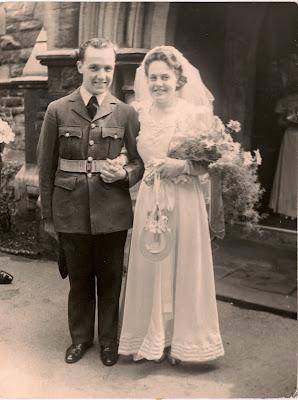 At the time only unmarried women were being called up, so the timing was really unfortunate, as once you were in, you were in, so married life meant long separations as they were often posted to opposite ends of the country. On the rare occasions that they managed to get leave together they tried to bring as much romance to the meeting as they could. They either had to spend it at my grandparents’ house or they would visit relatives as there was no money for hotels.

In 1943, as near to their first wedding anniversary as possible, they were able to spend a couple of days with my Grandmother’s sister in London. All their lives my parents were wonderful dancers and in 1943 London they enjoyed dancing to some well known Big Bands of the time.

Another great escape was the cinema, although the cost was often prohibitive. 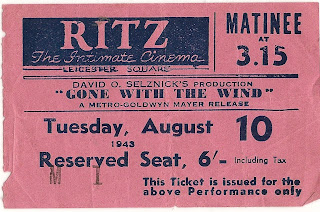 'Gone With The Wind’ had opened in 1940 and was a huge hit with cinema audiences during the Blitz. It played for four years and during that time my parents decided to go the Ritz Cinema in Leicester Square, to see it. They had been married for one whole year, which was something to celebrate in such uncertain times, and it brought some colour and romance into their lives. It was obviously very special to them as Mum saved her ticket.

Note the price of six shillings. Mum tells me that this was a lot to pay out of a weekly army allowance of nine shillings and sixpence (sixpence was taken at source to pay 'barrack damages'). The Ritz called itself the 'intimate cinema’ and was small and probably very plush, adding to the romance of the occasion.

I think the memory and the romance stayed with them long after; Dad grew himself a moustache, so there may have been a bit of a Rhett Butler thing going on. 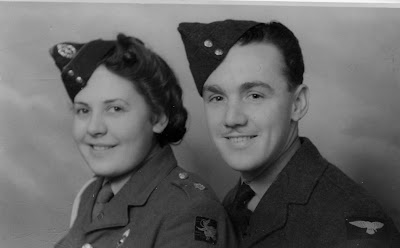 Many of the cards at that time depicted ladies in big crinolines, like Scarlett's, and some of the Wedding Anniversary and Birthday cards they sent in those early days reflected this. 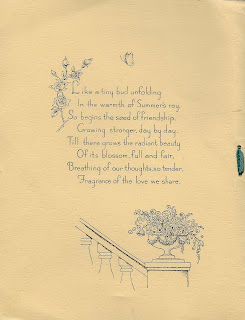 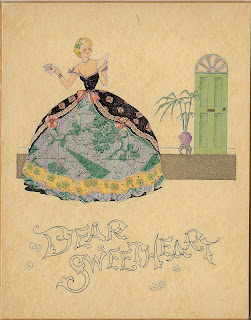 Not Scarlett, but a lovely romantic card, nonetheless. What can’t be seen here is that the dress is made of patterned silver paper placed behind an aperture in the card front. I loved this card when I was a little girl and thought the lady was beautiful. 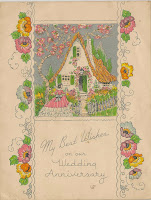 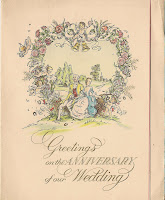 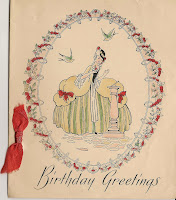 The cards don’t have the bright colours of today’s greeting cards; these were the post-war austerity years, but the subtle colours have a beauty all of their own and the big-skirted ladies add to the romantic feel.

Mum and Dad have just celebrated their 69th Wedding Anniversary and are as romantic as ever. Here they are at Mum’s 90th last November, where we get the kiss photo to go with the one which started this week’s post off! 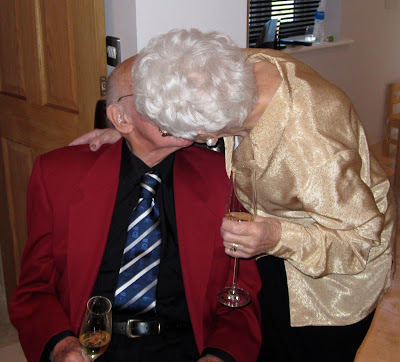 No, not Scarlett and Rhett, but I know which I prefer. If you enjoyed this, you may like my ‘Not Burt and Deborah’ post, with more Sepia Saturday romance. Go on pucker up!