Not Burt and Deborah 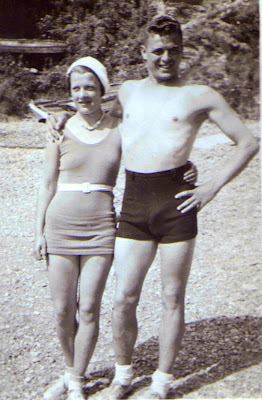 Sepia Saturday this week has the prompts of sea, sun and sand, and gave me the perfect excuse to post this photograph of my late parents-in-law, Noel and Mary. I think it was the first holiday they went on together somewhere around 1928.  I love this picture because of the bathing costumes, which were supposedly discreet and covered up more of the body than they do these days, when in reality, the fabric left very little to the imagination. No wonder Noel is proudly sticking out his chest and demonstrating his affection and adoration for Mary, with a protective arm around her shoulder. He seems to be saying, “She’s mine!”

In addition Mary has accessorised her beachwear with necklace, belt and hat. They have their socks and sand shoes on and probably aren’t going for a swim at all, but for a stroll down that shingly beach.

A few years later in 1953, Burt Lancaster and Deborah Kerr posed for similar shots as publicity for the film From Here to Eternity, where Burt was the epitome of manliness and Deborah’s costume was designed to show off all her assets.

Around about the same time as Burt and Deborah were euphemistically frolicking in the surf, I got my first glimpse of the ocean. I don’t seem too impressed! 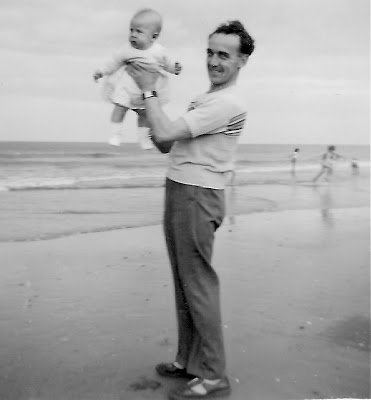 But a year or so later I obviously felt confident enough to toddle along the water’s edge and give Mummy a friendly wave. It always amazes me when I view photographs of myself at such a young age. I have no real memories of those events and yet there I was, captured in grainy black and white, whilst I was only really a ‘little dot’ myself. 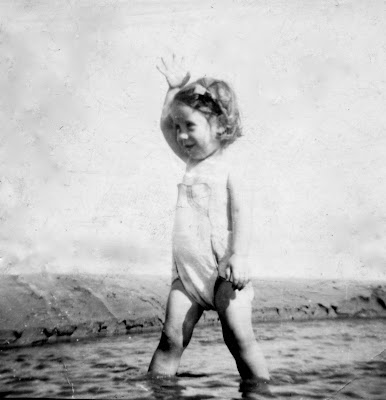 In the interest of parity, here is a photograph of my own mother, Mary, at a slightly older age, on holiday on the East Coast of England, where she had been taken by her aunt, to help her recover from tonsillitis. 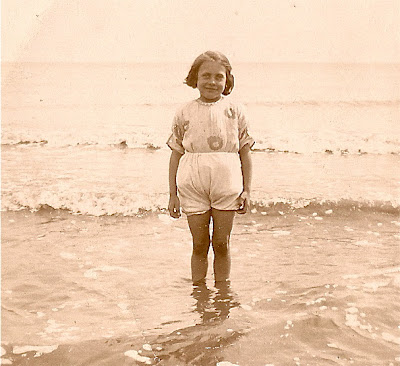 Times were hard in the thirties, and she was lucky to be getting any sort of holiday. The family budget probably didn’t run to purpose made bathing costumes so, resourceful as ever, my mother did what you do in such situations and tucked her dress in her knickers!

I can’t leave out my own father, so here he is aged seventeen demonstrating joi de vivre and modelling another fetching pair of ‘bathers’. This is about ten years on from Noel and Mary’s shopping catalogue pose and Dad is obviously wearing an early prototype for Burt’s figure-hugging trunks, about twelve years later. Swimming costumes in those days seemed to be made from the same heavy fabric which was designed to absorb the maximum amount of water. They hadn’t improved much by the fifties. We all remember staggering from the sea with our swimsuits weighted down with seawater and somewhere near our ankles. 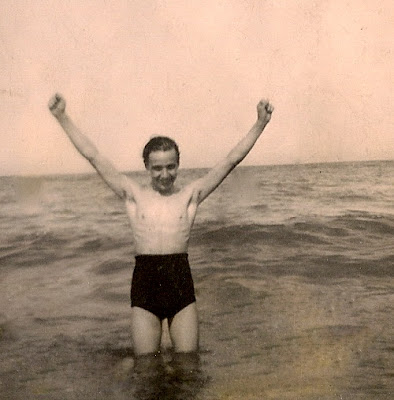 Dad doesn’t swim anymore but he paints lovely pictures of the ocean.  This one is my favourite and hangs on my living room wall. 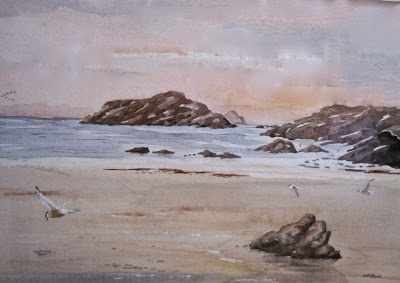 Dad will be 90 next month; Happy Birthday Les! And here are Mum and Dad enjoying the ocean and the sunshine near my home in Lanzarote; not a soggy swimsuit in sight. Two days after Dad’s 90th they will celebrate their 69th Wedding Anniversary. Their motto is ‘Only Forever’ after the Bing Crosby song which they heard a lot when they were falling in love and preparing to marry. Dad often writes it on his Wedding Anniversary card for Mum. Burt and Deborah eat your hearts out, these two demonstrate real enduring love. 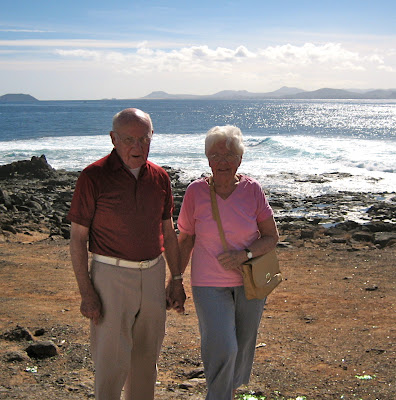 Click the link to hear and see Bing Crosby and Mary Martin sing this song in the 1940 film Rhythm on the River.
Only Forever


Happy Fathers’ Day on Sunday to all Dads whether they are more Bing than Burt, it matters not a bit.

Email ThisBlogThis!Share to TwitterShare to FacebookShare to Pinterest
Labels: From Here to Eternity, Lanzarote, Only Forever, sepia