Girl With a Pearl Accordion 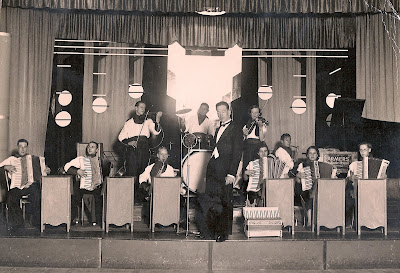 I picked up on the orchestral theme for this week’s Sepia Saturday post. Well, that may be stretching it a bit; it’s more of a band really. Here is a photograph of my mother (born in 1920) playing in 'Wally Morris’s Accordion Band' in Nottingham. She tells me that this was the only time she earned any money from her accordion playing. The band would travel to various Miners' Welfare social clubs to play, and on the way home Wally would divide up the takings amongst the band. Mum would be about 16 or 17 years of age, and the money went towards buying a bigger and better accordion with 120 stops, rather than the 48 she had. Apparently she said; “Nothing comes between me and my music!” ...................but then she met my Dad! When they married, in 1942, the accordion was sold to buy some sort of domestic appliance which “never worked properly”. 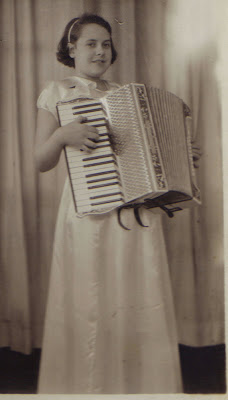 Here she is at the age of thirteen, with her first piano accordion. My Grandma and Granddad used to save a little each week towards it.This was the thirties and times were hard, with my Granddad often laid off from work in the building trade. However, they were thrifty people and my Gran was a good housekeeper, so, after much careful budgeting, the accordion was bought. At this time Mum was having piano lessons from a lady who gave piano and violin lessons. The music teacher fell under the spell of the piano accordion herself, and recruited Mum and her other pupils into ‘Madam Haig and Her Accordion Band’. 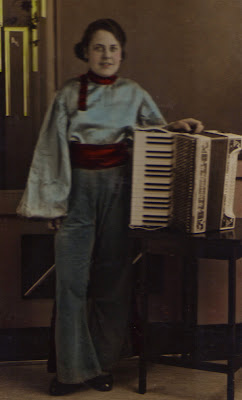 Mum also recalls playing with 'Al Roberts and His Blue Aces' where she got to wear a satin blouse and velvet trousers. This hand-tinted photo is apparently faithfully coloured.


Mum was obviously very proud of her accordion, which, as well as being a musical instrument, was something of a work of art in itself, highly decorated and inlaid with mother-of-pearl. 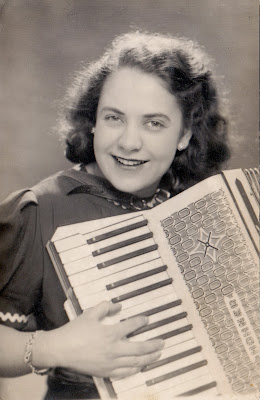 We had a piano in the house when I was growing up and Mum would play for me whilst I danced around the room as a little girl. I had piano lessons too but sadly, I didn’t inherit Mum’s musical ear. It skipped a generation, and my daughter is now the musician in the family. She played recorder, piano and trumpet, and history repeated itself as we would go and watch her play her trumpet in the local youth orchestra. After leaving university she formed her own band and wrote her own songs. My son had a very sweet singing voice as a child and would sing in school choirs. He plays an electric guitar for pleasure and has introduced me to the delights of ‘Magic Piano’ on the iPad. How times have changed. I wonder what my grandparents would make of the new technology. 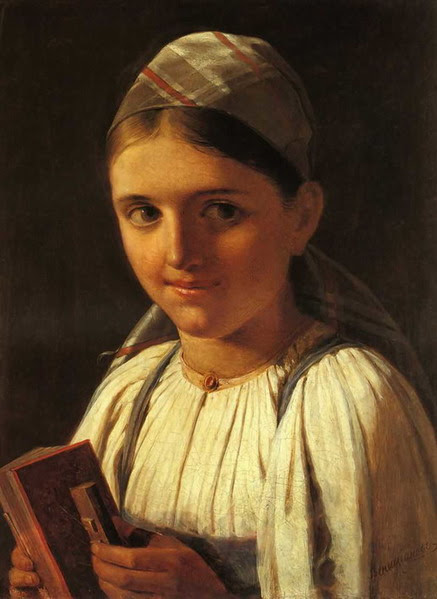 And here’s another work of art, lovely gentle piece called ‘Girl with Accordion’ by Venetsianov. Now, if Mum had an ‘accordion’ like that maybe she could have kept up her music. It was obviously small and easily transportable. However,  I suppose it could just as easily have been bartered for a domestic tool of some kind!
Posted by Little Nell at 08:02