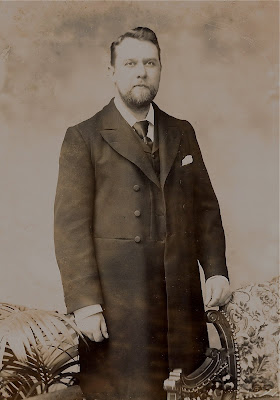 This is my contribution to this week's Sepia Saturday. There were several themes this week and when I found this portrait of a fine, good-looking gentleman with a neatly trimmed beard, I knew I had to go with the Beard theme.

Obviously I didn't know him personally as I believe this portrait was made around 1900 - possibly a little earlier-, but I do know a bit about him. The photograph came to me in a very small batch when a lady companion of my maiden great aunt died. She had no family, being a 'maiden' herself and quite old, so my mother, to whom she had been as well-known as her own aunt, made the funeral arrangements, with my father's help. All that is left of Mary are this little batch of pictures. This was her father, with whom she lived after her mother's relatively early death at the age of 47. With the photographs was her mother's black-edged memorial card. She was also called Mary and, according to the card, she died after 'intense suffering' in 1912. It is difficult to say how old 'Mr Carter' was when this portrait was taken, but going on the other evidence, and the fact that there is a picture of the younger Mary taken standing on the same piece of furniture, he may be around forty or so. We can only imagine the sorrow he had to bear, watching his own beloved Mary, suffer so much, and then bringing up the young Mary on his own. He looks a lovely chap, and what I remember of Miss Carter, coupled with my Mother's memories of her, he did a fine job. What a pity we know so little about him; I think I'd have liked him.

I am now able to update this post with some more information about ‘Mr Carter’. Following my own father’s death in 2012 we found Mary’s personal documents which had been given to my parents on her death as she had no living relatives. Mary’s original birth certificate was there and I now know that she was Mary Alice Carter born 23rd February 1899, registered in Hampstead, London. Her parents’ marriage certificate was also there. The fine looking gentleman was Robert Henry Carter aged 32 at the time of the wedding on 20th December 1896. Mary’s mother, Mary Elizabeth Norton was 31, so young Mary was only thirteen years of age when she lost her mother. If this picture was taken at the same time as the one I have of young Mary In Her Sunday Best, I would say that Robert Henry is about 38 years old in the above photograph. A man in the prime of his life.