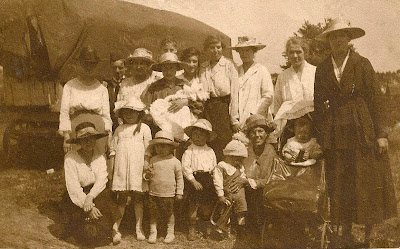 For Sepia Saturday this week our inspiration was a charming photograph of a child with sunhat, dog and toys. The photograph above covers the sunhats aspect nicely, as all the children appear to be well protected from the glare. This was in 1920, long before anything was known about the damaging effect of the sun’s rays. The lady on the right is my grandmother, and the child in the pushchair is my Mum’s brother Sydney William, known as Billy. Mum was born at the end of November 1920 so my Gran could well have been carrying her in this picture. This may be why she is wearing a comfortable jacket to hide her bump, when the other ladies are in summer blouses. The pushchair looks remarkably like a modern stroller or baby buggy, and set me off on an investigation as to when these machines first found favour. Fascinating; perhaps a cue for a Sepia Saturday theme in the future.

I’m not sure what the occasion is, but the concensus within the family is that it was a village fete or fair with possibly a ‘Beautiful Baby’ theme. Then again, perhaps the ladies had just got together whilst the men checked the beer tent! I thought they were all mums until I zoomed in and saw a young lad at the back left, wearing what appears to be some sort of uniform, maybe Boys Brigade.

No dogs in this picture, I’m afraid; perhaps they weren’t allowed - or maybe they were all busy in the 'Perfect Pets’ corner. There are a couple of ‘toys' however, as the little chap to the left of Billy is clutching a full-size bugle. Perhaps big brother on the back row had given it to him to help keep him quiet for the camera; he does look a little fidgety. Billy also has something in his hands, but I’ve no idea what.

It’s rather poignant to think that this is barely two years after the ending of the First World War, and these children, were born in hope, after so many young men had lost their lives. When this photograph was taken, little did they know that history would repeat itself less than twenty years later, and again, so many of those children of hope would be lost. Sadly for my family, little Billy, did not even make it to fight in WW2, as he died in a bizarre and freak accident at the age of fifteen; devastating my grandparents and his sister, my Mum. My grandparents are the same couple I wrote about in Wedding Day Delay. Billy was the apple of my great-grandparents’ eye, being born just four months after the third of my Gran’s older brothers to die.
Posted by Little Nell at 12:04