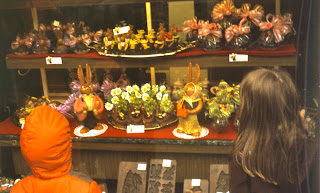 In 1983 when this photograph was taken, we were stationed with the RAF in Germany. The shops were full of Easter displays, with chocolate and marzipan eggs and bunny figures. I'm not sure what the objects at the bottom of the picture were but they appear to be moulds of some sort; perhaps for chocolate or biscuits. Our children would be aged nearly four, and five and a half. They must have almost had their noses pressed to the glass in anticipation of what was to come. This is my contribution to the Sepia Saturday blog. It's the oldest Easter reference I can find in my picture collection but it fits the bill as far as this week's theme. 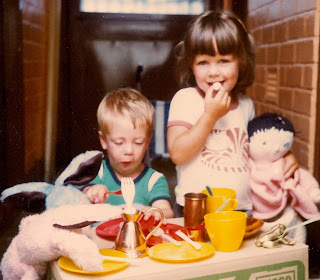 I also found this picture from 1981. The bunnies in this case being 'Pink Bunny' and 'Blue Bunny', which I made for each child when they were born. My son still has Blue Bunny and now my grandchildren play with him - just goes to show how well-made it was. Sadly my daughter lost Pink Bunny a couple of years ago in a house fire, but at least we have the pictures to remind us.
Posted by Little Nell at 08:00